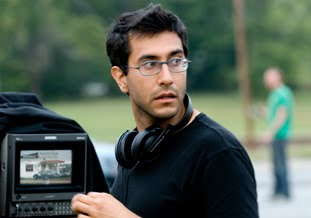 That's Ramin Bahrani, the native of Winston-Salem (born in 1975) who's becoming a talked-about creative force in the world of movies and whose most recent film, "Goodbye Solo," was shot entirely in Winston-Salem, except for the climax scene which was shot at the Blowing Rock with the wind sweeping up from below exactly the way it's supposed to.

Bahrani is Iranian-American, and his films have a definite knack for melding world-cultures and a humanistic spirtuality seen against the grittiest of urban backgrounds. "Man Push Cart" (2005) chronicled the tough life of an immigrant vending cheap food on the streets of New York City. "Chop Shop" (2007) follows a Latino street orphan hustling in the chaos of auto body shops in the very shadow of Shea Stadium.

In "Goodbye Solo" Winston-Salem has never looked worse, and I suspect the film might give the local Chamber of Commerce a bit of acid reflux, since this is not the Winston-Salem of Hanes Park and the Reynolda House. This is the Winston-Salem of decaying industry, abandoned warehouses, working-class neighborhoods, Quik Piks and strip malls. This is immigrant melting-pot America with Latinos, blacks, poor whites thrown together in the struggle for a slice of the pie.

The main character, Solo, is a Senegalese taxi driver who befriends an old white man who books Solo's taxi for a one-way trip to the Blowing Rock on October 20. Solo, who has a keen radar for fellow human beings, figures out that the old man intends to throw himself off the rock, and he sets about to prevent that.

I won't tell you what happens. See the movie. Then read the interview with Ramin Bahrani for additional insight into his philosophical outlook and his methods.
Posted by J.W. Williamson at 11/18/2009 08:37:00 AM
Email ThisBlogThis!Share to TwitterShare to FacebookShare to Pinterest
Labels: movies, Ramin Bahrani