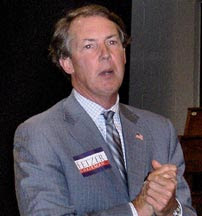 "Under the Dome" allowed NC GOP Chair Tom Fetzer to go on about how Tuesday's elections are good omens for North Carolina Republicans without bothering to ask him how he explained the virtual sweep of municipal elections by not only Democrats but by progressive Democrats and what that might portend for next year's races.

It's like Fetzer is chair of the Virginia Republican Party, since looking north for inspiration was all he wanted to do. Understandable, since North Carolina cities (except for Greensboro) turned down Republicans flat in Tuesday's elections. Hell, we hear that even North Wilkesboro went progressive.

We don't know enough about Greensboro politics to understand what went down there, but it was bad for Democratic incumbents. For what it's worth, you can read the Republican interpretation of the meaning of that city election here ... by a Greensboro blogger.
Posted by J.W. Williamson at 11/05/2009 12:07:00 PM
Email ThisBlogThis!Share to TwitterShare to FacebookShare to Pinterest
Labels: Greensboro, Tom Fetzer