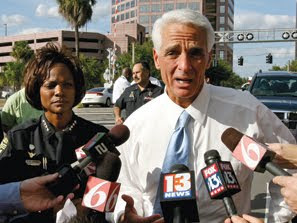 For all the dissension in the Democratic Party, the Republicans have their own internal rotting fish heads.

The Barracuda bites the hand that fed her.

North Carolina Republicans, even with headliner Dick Armey and the personal blessing of Jesus Christ, can't get but 400 measly protesters out in Raleigh over the weekend? Who'd a thunk it!