Will That Moose Hunt? 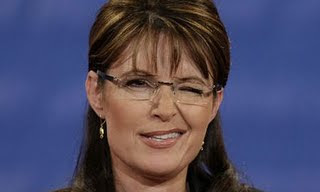 Less than 48 hours before the election for governor in Virginia, at least some of the state's voters began getting robo-calls from Sarah Palin.

Apparently, she can see Virginia from her house.

The Republican candidate for governor up there, Robert McDonnell, a right-winger of the Pat Robertson school, had politely requested that Palin not stick her cute little button nose into his election campaign, fearing that the state's independents might not cotton to the under-informed former Alaska governor (who couldn't even get through a single term in office).

Curiously (or perhaps, understandably, given the above paragraph), Palin does not mention McDonnell by name: "Virginia, hello, this is Sarah Palin calling to urge you to go to the polls Tuesday and vote to share our principles. The eyes of America will be on Virginia and make no mistake about it, every vote counts. So don't take anything for granted, vote your values on Tuesday, and urge your friends and family to vote, too."

"Your values" = gay-bashing anti-abortion get 'em women back in the kitchen, all of which fit McDonnell to a tee.

The calls are being paid for by the Virginia Faith and Freedom Coalition, the state branch of a national conservative group founded by former Christian Coalition director (and Jack Abramoff palsy-wowsy) Ralph Reed.

McDonnell is heavily favored to win over Democrat Creigh Deeds, but perhaps Palin intends to brag that she turned the (already very red) tide in McDonnell's favor. She ain't nothing if she ain't an opportunist.
Posted by J.W. Williamson at 11/02/2009 11:32:00 AM
Email ThisBlogThis!Share to TwitterShare to FacebookShare to Pinterest
Labels: Ralph Reed, Republican "brand", Robert F. McDonnell, Sarah Palin