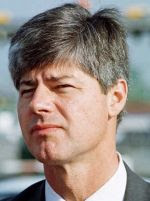 To get the Democratic votes for the narrow victory on Saturday for the House's "Affordable Health Care for America Act," Speaker Nancy Pelosi was forced into a corner by the Blue Dogs, led by Rep. Bart Stupak of Michigan. She allowed a vote on the Stupak amendment to the bill which not only outlaws abortion coverage in any public option insurance plan (a redundancy, since the so-called Hyde Amendment already did that) but also outlaws abortion coverage in any private insurance plan if it participates in the eventual federal "insurance exchange."

In other words, the Stupak Amendment effectively bans abortion coverage in all insurance plans, both private and public, an interference in women's health care that is not just a step backward but a naked slap at what has been a legal right of American women since 1973. Some 64 House Democrats voted for this crap. And all the Republicans (save one). They had a major assist from the League of Catholic Bishops.

Bart Stupak is not just your garden-variety Blue Dog. He's also a "C-Streeter," a resident of the Capitol Hill row house where some holier-than-thou male members of Congress pray loudly to God, often about the proclivity of some of their residents to fornicate freely with lesser mortals. The C Street residence has been the safe retreat for several superior "Christian" men, including Mark Sanford of "hiking the Appalachian Trail" fame and John Ensign, who screwed a staff member and then paid her off.

Residents in the C Street house are members of a shadowy and secretive fundamentalist Christian group calling itself The Fellowship. Founded in 1935, it has held clear theocratic designs on government. And also on women, who are obviously supposed to be their obedient vessels.

After Bart Stupak successful cornered Nancy Pelosi into throwing American women under the proverbial bus Saturday night, he dutifully cast his yea vote for final passage of the thus severely restrictive "Affordable Health Care for America Act" and then was observed from the gallery of the House chamber to do the following:

Stupak, during the vote on the final bill, didn't stick around long. He cast his vote quickly and shook the hand of Majority Leader Steny Hoyer (D-Md.), then headed over to the GOP side, where he was warmly welcomed.

Rep. Patrick McHenry (R-N.C.), a strident partisan, was the first to greet him, shaking his hand and slapping him on the back. Stupak then found [Republican Minority Whip Eric] Cantor and [Alaskan Rep. Don] Young, shook their hands, and retired from the floor to the Republican cloakroom.

Birds of a feather.

Meanwhile, another key group of the progressive coalition, pro-choice women, is hung out to dry. And Democrats wonder why they may start losing more than just Virginia and New Jersey.
Posted by J.W. Williamson at 11/09/2009 11:04:00 AM
Email ThisBlogThis!Share to TwitterShare to FacebookShare to Pinterest
Labels: abortion rights, Bart Stupak, health care, Patrick McHenry