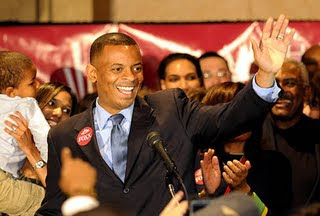 Where was the celebrated Republican/conservative resurgence in North Carolina yesterday? Nowhere much.

Charlotte
...elected its first Democratic mayor in 22 years, Anthony Foxx (no relation), pictured left, and increased the Democratic majority on the city council to eight out of 11 seats.

Chapel Hill
The N&O summarized this race succinctly: "The liberal establishment held off a band of businessmen trying to change the town's course." So Chapel Hill has a new mayor, Mark Kleinschmidt, and the developers took only one of four available seats on the town council. Shades of Boone's Templetons: The pro-business candidates "were being influenced heavily by a specific group of developers, and I think in the end that backfired on them," said the top vote-getter, Penny Rich (love that name!).

Winston-Salem
Big reelection win for Dan Besse after "a sometimes-heated campaign" against Republican challenger Ted Shipley. Wish I'd been following this one! Dan is a personal hero of ours. Looks like a Democratic sweep otherwise in Tobacco City.

Durham
Democratic incumbents trounced their challengers, though the top vote-getter among the losers, a Libertarian, crowed that his 27% of the vote was a personal best for him and a sign of great things coming in the future.