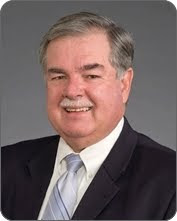 There is some Forsyth County talk that Virginia Foxx might get a Republican primary challenger in one Donny Lambeth, currently president and chief operating officer of North Carolina Baptist Hospital and chair of the Winston-Salem/Forsyth County Board of Education.

Lambeth, a former Democrat, would be a moderate, sane antidote to Madam Foxx's irrational psycho manifestation of poisonous partisanship. In other words, he'd have a snowball's chance of beating her.

But the actual goal of a Lambeth run against Foxx in 2010 would be preparing himself for a 2012 race for what Forsyth County activists hope will be the redistricting result of the 2010 Census, the carving out of a new district for Winston-Salem which would shove Foxx off onto the rest of us while Tobacco Central takes a more rational course into the future.

Good luck with that agenda.
Posted by J.W. Williamson at 11/30/2009 11:40:00 AM
Email ThisBlogThis!Share to TwitterShare to FacebookShare to Pinterest
Labels: Donny Lambeth, Virginia Foxx