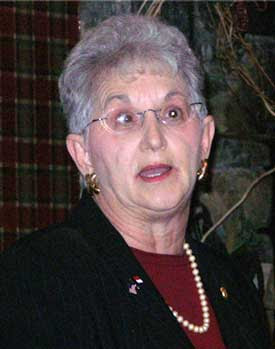 Madam Virginia Foxx stood on the west front of the Capitol yesterday, shucking and grinning as one of Michelle Bachmann's backup singers, basking in the glow of some 5,000 anti-abortionists and tea partiers bused in by Americans for the Prosperous to shut down the government and kill health-insurance reform. Many of the demonstrators were covered in fake blood and carried mangled dolls, representing aborted fetuses, as someone else dressed as the Grim Reaper mimicked leading them all to hell. Other demonstrators chanted "Weasel Queen," their favored nickname for House Speaker Nancy Pelosi.

In Madam Foxx's line of sight were a number of protestor signs: President Obama in white coat, his face painted to look like the Joker; "Stop Obamunism"; "Obama takes his orders from the Rothchilds" [sic], accusing Obama of being part of a Jewish plot to introduce the antichrist; and a pair of 5-by-8 foot banners proclaiming "National Socialist Healthcare, Dachau, Germany, 1945." Both banners showed close-up photographs of Holocaust victims, many of them children.

Those huge Nazi death-camp signs were the visual manifestation of what The Madam had already said on the floor of the U.S. House this past Monday.

Anyone who watched any of this bizarre Michelle Bachmann rally yesterday ("Taking the GOP Off the Cliff") could not miss Madam Foxx and her helmet of white crazy-lady hair. While others ranted at the microphone, she was always nearby, the perfect marionette, though for all her mimicking of great pleasure at being there in the company of so many other political whores, she looked as nervous and as pained as someone secretly passing gas in an elevator.

When her turn came at the microphone, she bellowed, "This Congress is on a collision course with the principles of freedom and liberty that our Founding Fathers bled and died for. We will not be silenced. We will kill this bill."

Well, they ARE clearly the Party of Death.
Posted by J.W. Williamson at 11/06/2009 09:31:00 AM
Email ThisBlogThis!Share to TwitterShare to FacebookShare to Pinterest
Labels: health care, Michelle Bachmann, Republican "brand", Virginia Foxx