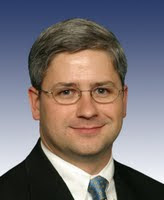 Rep. Patrick McHenry (R-Poisontoadsville) is waaay too important for his britches.

On Sunday he left his SUV Ford Explorer (compensating much, Patrick?) illegally parked at the Charlotte-Douglas International Airport. "The front tires were on the curb. The back tires were in the driving area of the parking lot, one resting atop a yellow speed bump." The photographs that the Gaston Gazette reporter took are precious!

McHenry's spokesman said the Congressman was running late, had somehow temporarily misplaced his personal servants, and was greatly needed on urgent national business of shoving cream pie in Barack Obama's mug.
Posted by J.W. Williamson at 11/04/2009 11:43:00 AM
Email ThisBlogThis!Share to TwitterShare to FacebookShare to Pinterest
Labels: Patrick McHenry, Republican "brand"

You guys are out of control.  I just want to say (change the subject), McHenry is a young, inexperienced snob and I swear I can't understand how he ever managed to get where he is except that maybe no one has ever run against him.  He is a baby!!  What does he know about business or for that matter politics???  He's another Obama, "never done anything" - he just gets there.  Why would anyone vote for him?  Furthermore, the parking incident speaks volumes.  Why can't he behave like the rest of us have to, oh yeah, he's above the rules, he's somebody. Well, I'm sick of "somebodies".  I'm all about real men who aren't so egotistical they expect exceptions to be made "just for them".  Well, Your momma don't live at the airport McHinney so grow and join the world.