Proud To Be a Parrot 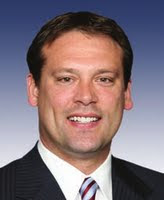 Heath Shuler (NC-11) got called out here and in many other places for obediently inserting language in the Congressional Record supplied to him by a major drug company ... by way of justifying a further watering down of health care reform (giving Big Pharma 12 years of shielded exclusivity to "biologic drugs" before cheaper generics could be introduced; alternative legislative language would have granted five years of exclusivity).

The Shuler organization has decided to handle the bad press on this issue by coming out and essentially saying he's pleased to be a Huge Tool.
Posted by J.W. Williamson at 11/19/2009 09:42:00 AM
Email ThisBlogThis!Share to TwitterShare to FacebookShare to Pinterest
Labels: health care, Health Shuler