Too Many Mad Hatters at the Tea Party 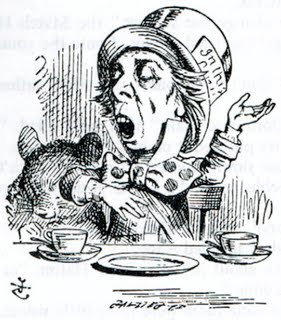 Trouble in the "tea party" movement.

Sez a Texas tea party organizer: "You have some interesting folks in the Tea Party movement -- some of them I can support, but some of them are kind of out there and radical, and I don't want to associate myself with them."

So the supposed "movement" is making like cheap pine furniture: there's a lot of splintering and some sore asses.

Extremism is great for movements ... up to a point (to be specific, the point at which your movement needs to attract more people than it repels by virtue of its Obama-Is-Hitler and health-care-reform-is-the-Holocaust rhetoric).
Posted by J.W. Williamson at 11/20/2009 12:00:00 PM
Email ThisBlogThis!Share to TwitterShare to FacebookShare to Pinterest
Labels: Republican "brand", teabag protest