Additional GOP Diagnoses To Be Ignored 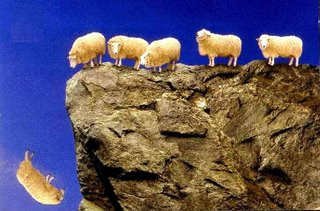 Charlie Cook headlines two of the "best minds" among the ranks of national Republican operatives and their prescriptions for bringing their party back from the grave. These two operatives choose to remain anonymous for obvious reasons: their advice is going to be heroically ignored and their advice would earn them a one-way trip on a sharp rail out of town if anyone knew their names.

The first operative flies directly in the face of most of the GOP soul-searching we've so far covered here:

...when I hear people say it is still a center-right country and that we need to return to our conservative roots, I think that is a long-term strategy to do nothing and a strategy that will keep us in a permanent minority.

The second operative ends up with this fourth point:

...stop being [misguided] on immigration. We are alienating huge parts of the electorate, we are turning our primaries into single issue "hate" contests and ignoring the single fastest growing bloc of voters in the country.

We can be thankful that all this advice will not be read, and if read, will not be followed. From what we've seen, Republicans intend to purge their faint-hearted "moderates" and charge off even more resolutely toward the Cliff of Total Wacko Extremism.
Posted by J.W. Williamson at 12/03/2008 12:23:00 PM
Email ThisBlogThis!Share to TwitterShare to FacebookShare to Pinterest
Labels: Charlie Cook, conservative movement, National Republican Party