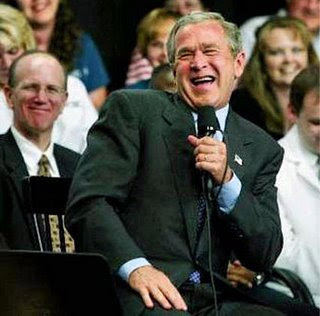 Rarely content where there's money to be made, the George W. Bush Criminal Conspiracy has taken steps to allow the mountains of West Virginia, eastern Kentucky, southwest Virginia, and the Cumberland Plateau in Tennessee to be bulldozed into any flanking creeks, branches, streams, rivers, rivulets that get in the way of the strip miners.

The goddamn Godless bastards are also taking steps to make it impossible for Congress to intercede to prevent all kinds of other mining on public lands, including those adjacent to some of the gems of the American landscape like the Grand Canyon.

This, in addition to the myriad other perversities of power George W. Bush has been busily enacting in his Last Days in office through the regulatory powers of the Executive.

Rape and pillage is his legacy, and our American resources are only part of it.

Sorry, sorry, sorry excuse for a human being.
Posted by J.W. Williamson at 12/05/2008 10:59:00 AM
Email ThisBlogThis!Share to TwitterShare to FacebookShare to Pinterest
Labels: George W. Bush