The NC King of Special Interests 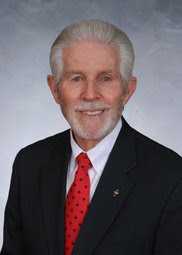 The toleration of a major industrial scofflaw in NC owes much to Republican Labor Secretary Cherie Berry (natch) but also to the man pictured here, Democratic state Senator Charles Albertson, who represents Duplin, Lenoir, and Sampson counties, which are knee-deep in the eviscera of meat-packing, both hog and chicken.

Last May Gov. Easley, convinced that the state's Labor Department was not enforcing safety laws, asked the General Assembly to approve money for more inspectors. Sen. Albertson blocked that initiative, according to an article in the Observer today.

Since 2002, [Albertson] has received more than $25,000 in campaign contributions from N.C. poultry executives and from the political action committee that represents them. He got $3,750 of that money Feb. 26, about two weeks after the first Observer stories were published.

More than $6,000 came from the N.C. Poultry Federation, the industry's state PAC. That's more than the group gave to any other lawmaker. Much of Albertson's remaining poultry money came from executives with N.C.-based Prestage Farms and House of Raeford Farms.

Not one to be easily embarrassed, evidently, Albertson even told the Observer, "I've been a little disappointed at times they haven't given me more."

There's a public servant to be proud of!

He's blind to more than just these appearances of pay-to-play. He says he hasn't heard any complaints about the poultry industry from his constituents. Doesn't hear, doesn't see, doesn't do.
Posted by J.W. Williamson at 12/28/2008 12:58:00 PM
Email ThisBlogThis!Share to TwitterShare to FacebookShare to Pinterest
Labels: Charles Albertson, Cherie Berry, chicken industry