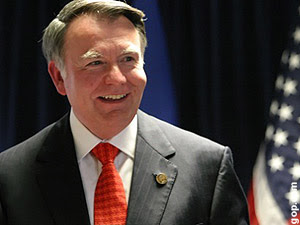 Talking Points Memo got its mitts on a private memo written by Republican National Committee Chair Mike Duncan to the members of his group, and it makes for some interesting reading. Especially in light of the fact that Duncan is running for reelection to his post against five others who have not been (in public, at least) half as honest as Duncan is in his memo.

"...many Americans today believe the party is stale and does not deserve that label ["Party of Ideas"]..."

"...we have not used our principles to provide solutions to the kitchen table concerns of middle-class America..."

Republicans have a debilitating habit of "falling back on ideology alone"

Now, Duncan wrote his memo as introduction to his new initiative, the Center for Republican Renewal, but introduced as the appointed director of this new center one Steven J. Duffield who was also the force behind the 2008 Republican National Platform.

This is how the Republicans will transcend the dictates of ideology? Duffield was responsible for producing one of the most ideologically narrow political documents in history. So we're left wondering just how "Republican renewal" is going to hatch out of that stale egg.
Posted by J.W. Williamson at 12/20/2008 11:30:00 AM
Email ThisBlogThis!Share to TwitterShare to FacebookShare to Pinterest
Labels: Center for Republican Renewal, Mike Duncan, National Republican Party, Steven J. Duffield