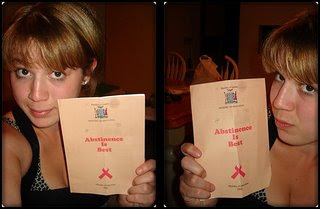 News this a.m. about so-called "abstinence pledges" ("I promise God and all His angels that I shall not fornicate until I am successfully and legally married, and then only with my successful and legal spouse...") makes us flash on this moment from "Jurassic Park":

Henry Wu: You're implying that a group composed entirely of female animals will... breed?

The fantasies of adults that somehow, given enough doses of super-religion, their teenaged children will not sniff out opportunities for unbridled sexuality -- and that, furthermore, to teach them how to protect themselves from disease/unwanted pregnancies is more vile than catching the disease/unwanted pregnancy -- has been dealt a scientific blow by the Johns Hopkins Bloomberg School of Public Health.

A "large study" by the aforenamed group found that teenagers who had promised God they would remain virgins were just as likely to have premarital sex as heathen teenagers, but -- much worse -- they were "significantly less likely" to use condoms once they succumbed to carnal urges.

But because this is scientific research and not divinely inspired wishful thinking, it will be ignored.
Posted by J.W. Williamson at 12/30/2008 10:51:00 AM
Email ThisBlogThis!Share to TwitterShare to FacebookShare to Pinterest
Labels: abstinence only, religion and politics