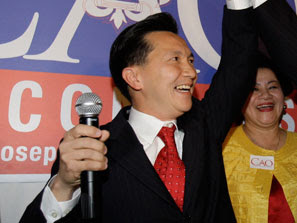 Amazing what a few months will do in the Republican Party to the wholesale mocking of "community organizers." Sarah Palin and Rudy Giuliani both stood on the stage in St. Paul at the Republican National Convention and jeered Barack's background as basically unAmerican or at least contemptible.

Now they're cheering the Vietnamese community organizer Anh "Joseph" Cao, who beat incumbent Democrat William Jefferson in Louisiana for a seat in the U.S. House.

You'd think, in fact, to listen to Republican House Minority Leader John Boehner, that Cao's candidacy was ALL his idea. The fact is, however, that Cao was considered such a laughable long-shot that not a single Republican in Louisiana's congressional delegation donated to his campaign (according to Politico).

You'd also think, to hear Boehner and Newt Gingrich crowing about Cao's victory, that the national GOP has now turned the corner after its disastrous November defeat and is miraculously appealing to minority voters. Never mind that Cao's opponent had been indicted on 16 counts of bribery.

Cao sounds pretty good to us, what little we've read. He and part of his family were evacuated to Texas from Saigon when he was eight years old. He earned his B.S. from Baylor University and then decided to become a Jesuit priest (which tells us at least two things: he's a hardliner on abortion, but he's also a hardliner against social injustice, and he knows how to argue -- okay, that's three things). After an additional college degree at Fordham, he taught for a time including at Loyola University in New Orleans. He left the Jesuits, married (he has two small children), and became a lawyer in New Orleans particularly specializing in "social and legal equity" for immigrants. "Joseph initiated programs to help victims of torture and to provide social and cultural developments for poor minorities" (from his campaign website). His most intense community organizing came following Hurricane Katrina, which devastated both his home and his law office: "Joseph has endured struggles against insurance companies and the political leadership and has proven to be a leader in rebuilding the Vietnamese community. He assisted the residents in New Orleans East in their successful fight against a landfill that threatened to change the social fabric of their community. He fought energy and telecommunication companies to have basic necessities restored in a timely fashion."

Now there's every chance in the world that Joseph Cao will give up his beliefs in social and legal justice and start voting in lock-step with his Republican brethren in the House. But we doubt it. We've known a few Jesuits in our time, and they do not as a tribe tend to blow with the winds. Historically, they're much more into martyrdom for their cause, if it comes to that. And so far, Joseph Cao looks as though he's an advocate for the poor against the rich and powerful.

Never mind the bear hug that John Boehner and Newt Gingrich are trying to wrap him in.
Posted by J.W. Williamson at 12/09/2008 10:03:00 AM
Email ThisBlogThis!Share to TwitterShare to FacebookShare to Pinterest
Labels: Joseph Cao, National Republican Party