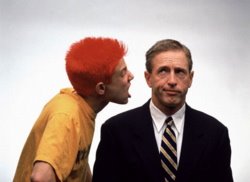 Asheville Citizen-Times reporter Joel Burgess takes an extended look this a.m. at why three lone North Carolina counties in the western mountains went for Obama, while all around them was red hot for McCain/Palin. Answer: young voters. All three counties contain a major state university.

Didn't your mother always warn you that a little larnin' was a dangerous thing?

Of the Democratic-leaning counties, Watauga has the largest percentage of 18- to 25-year-old voters — 31.3 percent. Jackson is next with 15.4 percent, then Swain with 12.7 percent and Buncombe with 11.6 percent. Obama won all but Swain by differences as large as 57-43 percent.