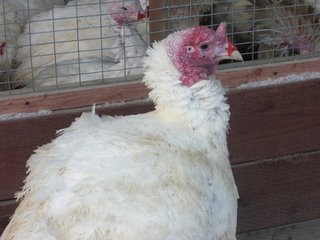 "A type of irony in which Fate, the Universe, God, or whichever omnipotent force you choose makes it their sole purpose to mess with your life. They like to screw you over, and watch the mayhem while laughing at your misfortune."

Failed national candidate Sarah Palin, self-described "friend to all creatures great and small," acts "presidential" and pardons a turkey, while a bloody turkey slaughter proceeds directly over her left shoulder.

And the cameraman had warned her that bloody snow was in the lens, along with expiring big birds, but the Alaskan doofus said, "No worries!"
Posted by J.W. Williamson at 11/21/2008 10:21:00 AM
Email ThisBlogThis!Share to TwitterShare to FacebookShare to Pinterest
Labels: Michael B. Mukasey, Sarah Palin