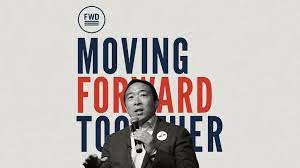 Twitter engages me because of the sudden appearance of smoke signals. From one ridge to another, I depend on finding out what I haven't already found out because my brethren on the opposite ridge built a fire and sent up a puff of wood smoke.

This morning it was Judge Bob Orr, who wrote, somewhat cryptically, "I'm all in with this crew," and he linked to a Reuters.com article detailing the start-up of a new political party calling itself "Forward." (Was that name market-tested?) The new party is headed up by Andrew Yang, who used to be a Democrat, and Christine Todd Whitman, who was once upon a time the Republican governor of New Jersey.

The Reuters article names as organizers of Forward mainly former members of Republican administrations, including the Trump one, and not so many Democrats. Forward wants to be "centrist" (but the devil, as always, will be in the details). "How will we solve the big issues facing America? Not Left. Not Right. Forward." (At this moment I can't help flashing on that time when Robert E. Lee sent Longstreet's corps, 15,000 troops, right up the middle.)

"Two pillars of the new party's platform are to 'reinvigorate a fair, flourishing economy' and to 'give Americans more choices in elections, more confidence in a government that works, and more say in our future'." As generalizations go, that one will suffice until a grander one comes along. From the article:

Forward aims to gain party registration and ballot access in 30 states by the end of 2023 and in all 50 states by late 2024, in time for the 2024 presidential and congressional elections. It aims to field candidates for local races, such as school boards and city councils, in state houses, the U.S. Congress and all the way up to the presidency.

Clearly, Forward will hurt the Democratic Party and won't much bother the Trumpists. (Andrew Yang has a big following among 20-somethings.) Lord knows there have been multiple times over the decades when I've cussed the national Democrats and threatened that I'd join an effective third party if one appeared, but nope to Pat Buchanan's Reform Party (essentially, detritus that Ross Perot left behind) and nope too for the Green Party, with which I might share a good deal if it weren't so trifling. I'm not into empty protest votes.

Posted by J.W. Williamson at 7/28/2022 08:11:00 AM
Email ThisBlogThis!Share to TwitterShare to FacebookShare to Pinterest
Labels: Andrew Yang, Forward