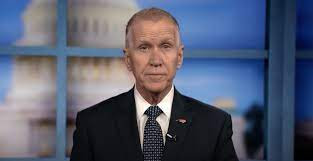 Many news outlets are reporting that NC Sen. Thom Tillis is among the four Republican senators who've already signaled their willingness to vote YES on the marriage equality bill that just passed the US House.  (And we should point out that the bill would protect both same-sex marriages and marriages between interracial couples.) The other three are Sens. Susan Collins of Maine, Rob Portman of Ohio, and Lisa Murkowski of Alaska.

This announcement puts Tillis at odds with the entire Republican congressional delegation from NC.

The hard Trumpist right in NC is going bananas over this announcement. For example:

"Seriously. How is it BETTER to have this sniveling cash-gobbling weasel in office instead of a Democrat? This guy, with his very existence in politics, is setting conservatism in North Carolina back DECADES."

Getting six more Republicans to vote for marriage equality appears not impossible, according to national sources. It'll take a total of 10 Republican senators to vote with Democrats to overcome the goddamn filibuster. Here are the other senators in play, according to The Hill:

The “I support same-sex marriage (and even have gay friends!), but don’t want to reveal my stance yet” crowd: Sens. Roy Blunt (Mo.), Joni Ernst (Iowa) and Tommy Tuberville (Ala.).

The “This bill is unnecessary at this time, but I really don’t want to reveal where I stand” group: Sens. John Thune (S.D.), Mitt Romney (Utah), and Chuck Grassley (Iowa).

Could the marriage equality act actually make it through Congress? Yes, and it only took the overturning of Roe v. Wade for those Republican senators to feel the wrath of the voting public. But we're not yet holding our breath.

Posted by J.W. Williamson at 7/21/2022 09:27:00 AM
Email ThisBlogThis!Share to TwitterShare to FacebookShare to Pinterest
Labels: gay marriage, Thom Tillis