Who Shot the Sheriff?

"...a Pulitizer Prize winner should not be awarded tenure because she doesn't give enough credit to white people" 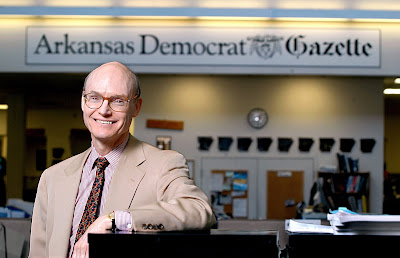 So it appears pretty certain that the man the J-School is named for at Chapel Hill had a strong role in nixxing tenure for Nikole Hannah-Jones. Walter Hussman Jr. gave $25 million to the School of Journalism and Media and got his name on the building in 2019. He had gone to the school and had made a fortune owning newspapers, including the fabled Arkansas Democrat-Gazette.

When Walter Hussman heard that Hannah-Jones was being considered for the prestigious Knight Chair in Race and Investigative Journalism at the Hussman School of Journalism, he began writing emails to UNC-CH officials and expressing his reservations about the appointment. "The Assembly" (a new "digital magazine" for freelance writers in North Carolina. Subscription is required) obtained those emails, and former News&Observer executive editor John Drescher wrote a lengthy article quoting from them and delving into the numerous issues raised when a big-time donor puts himself in the way of a hire.

Drescher doesn't quote the Hussman emails at length (drat!). Hussman is a respected old-time American journalist with a strict philosophy of objective reporting, and I would have liked to take in the full unfurling of his thoughts on Hannah-Jones in long-form (so to speak). Don't know if I'm getting full Hussman in the brief excerpts that Drescher quotes. Is he a fuddy-duddy with a congenital blind spot for his own biases? From what Drescher quotes, Hussman was particularly alarmed by Hannah-Jones's key role in producing the famed 2019 Project on American slavery and racism. Hussman liked the criticism of the project by a group of four prestigious (white) historians:

“I worry about the controversy of tying the UNC journalism school to the 1619 project. I find myself more in agreement with Pulitzer prize winning historians like James McPherson and Gordon Wood than I do Nikole Hannah-Jones.

McPherson and Wood, along with two others, had signed a letter to The Times saying they were deeply offended by the new interpretation of American history offered in the 2019 project -- the thesis that American history was shaped -- and is still shaped -- by anti-Black racism and that maybe the Founders and their followers up to the present day did not and do not in fact commit to the ideals they say they revere. Ouch. The 2019 Project tromped on white piety about the high-mindedness of our national identity, a view cherished by both liberals and conservatives (Adam Serwer).
Hussman wrote in one email that he was particularly offended by this Hannah-Jones's sentence: “For the most part, black Americans fought back alone.” Hussman fastens on the odious exclusiveness of "alone" while ignoring the qualifying "for the most part":

“I think this claim denigrates the courageous efforts of many white Americans to address the sin of slavery and the racial injustices that resulted after the Civil War .... Long before Nikole Hannah Jones won her Pulitzer Prize, courageous white southerners risking their lives standing up for the rights of blacks were winning Pulitzer prizes, too.”

To which Judd Legum commented that Hannah-Jones's big sin must have been not complimenting white people enough (see above).

Still an open question: How did Hussman's criticism of Hannah-Jones get disseminated to the Chapel Hill Board of Trustees? Did it get disseminated? We know (thanks to The Assembly) about Hussman's emails to faculty/administration figures (the chancellor, the dean, etc.). Did he also email members of the BOT?

If I remember right, without the article at hand, it did say which Trustee--Chuck somebody--was informed about Hussman's concern.
Anyway, I suspect the major problem was among UNC higher administrators who panicked at possibly losing $25 million, very little of it, already given, mostly promised. If so, they don't deserve their positions unless they do their mea culpas and give Hannah-Jones her tenure.