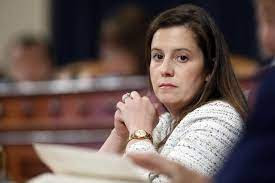 Congresswoman Elise Stefanik, who intends to succeed Liz Cheney in Republican leadership, has done her required public catechism -- stating her undying loyalty to Trump and all he believes, including The Big Lie. Doing it publicly is the last step (?) to an elevation among the Trumpists, whom she otherwise fears. She has to do the catechism not only to survive but to also rise in the new ranks of the Trump Republican Party, and by Gawd, Stepfanik went down on her knees, and now sez she's seen the light.

In pledging herself to a former TV entertainer, she appeared "Thursday morning on the podcast of former Trump campaign and White House aide Stephen K. Bannon, where she sought to make the case that she is a reliable supporter of Trump and devoted to his brand of nationist populism, distancing herself from her ties to the old establishment wing of the party and her moderate voting record in Congress" (Colby Itkowitz).

...[Stefanik] kept her distance from Trump early in his presidency. She was the co-chair of the moderate GOP Tuesday Group with then-Rep. Charlie Dent (R-Pa.) and backed former Ohio governor John Kasich for president in 2016.

...Stefanik voted against some of [Trump's] policy proposals, including the 2017 tax cuts [and funding for The Wall].

Raw ambition to rise in the Trump Republican Party requires lying for Trump, specifically lying to pump up his ego. In Stefanik's case, her willingness to do a buy-in on "Stop the Steal" is probably not just her ambition playing the odds. It's survival itself in a party which is right now this minute purging (or censuring) every politician deemed disloyal to Caesar.

Caesar's Creed ("Let the repentant say so in  public"): "The election fraud in Georgia and Arizona and every other state that Trump should have won (and probably did win) -- it was outright fraud in multiple places that changed the results for Biden, and the legitimate president now plays golf at Mar-a-Lago."

Is Stefanik's forced confession not a now-typical spectacle accompanying the implosion of a venerable political party? The kissing of the cold hand with its big ring, the public abasement of character to a self-serving CEO, the vowing of fidelity to a monster who would just as soon cut your fucking throat.

What set me off was how Stefanik, while simultaneously publicly kissing the ring in a manner that can only be described as revolting, slapped the sponge on Trump doubters, alleging they suffered from "Trump derangement syndrome," couldn't see all the good that Trump has done and all he accomplished for the betterment of humanity.

I know when it's raining, and I see who's deranged.

Posted by J.W. Williamson at 5/07/2021 10:34:00 AM
Email ThisBlogThis!Share to TwitterShare to FacebookShare to Pinterest
Labels: Donald Trump, Elise Stefanik, Trumpism

And now we wrestle with the questions: How did it come to this? and... Where do we go from here? A chasm divides our nation--on one side facts, reason, and compassion; on the other side, active rejection of facts, tribalism, and a corrosive selfishness...

A worse pair of questions for me: "What if Trumpism wins in 2022, even without Trump on any ballot? What if Trump himself runs and wins again in 2024?"

The end of democracy, specifically OUR democracy, is not only still possible but also practically preordained by the repeating of history.