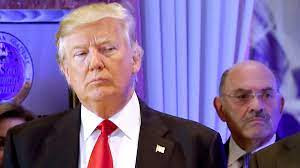 After all the damage he did to our democratic institutions and to the integrity of our Republic, looks like Donald Trump's financial and business deeds may catch up with him firstest and fastest. It's hardly the resolution I was looking for -- insurance fraud can be so deadeningly complicated and ultimately so boring that my condolences go out to any potential jurors who will have to sit and hear all the evidence. As to the malefactor, we take what we can get. The jerk deserves comeuppance.And Manhattan District Attorney Cyrus R. Vance Jr. means business. He's convened a "special grand jury" for a six-month marathon of hearing all the evidence he's gathered, since he -- and he alone -- has gained access to Trump's tax records. One criminally relevant question: Were the values of specific properties in the Trump Organization’s real estate portfolio manipulated in a way that defrauded banks and insurance companies, and what (if any) tax benefits were obtained illegally through unscrupulous asset valuation?
(I suddenly feel uncommonly drowsy. Please excuse me while I take a nap.)
This wakes me up: "...Vance’s investigation has [probably] progressed to the point that prosecutors will visit the grand jury, present evidence and witnesses, and potentially ask that charges be considered. Prosecutors were unlikely to take that step without believing they had evidence to show there was probable cause to believe someone had committed a crime..." (according to a former assistant district attorney in Manhattan).
Do you have any doubt who someone is?
The whole Trump house of cards (and cads) appears to be crumbling because of the cooperation of one man and the toppling dominoes he set in motion -- Michael Cohen, Trump's former fixer who's already done time in jail for crimes that Trump obviously ordered. Trump's allowing Cohen to take that fall -- “I’m not involved, and I’ve been told I’m not involved .... He handled just a tiny, tiny little fraction of my legal work" -- snapped Cohen out of his daze. Ole Donald will throw anybody under the bus to save his own ass. "So fuck him," thinks Cohen, before he goes to talking (way back at the beginning of 2019).
The biggest domino will be Allen Weisselberg, the Trump Organization’s chief financial officer, who knows the whereabouts of every penny and Trump's intent at every step during literally decades of financial shenanigans and double-dealings. One of Weisselberg’s sons also works for the Trump Organization, where he manages the company’s Central Park ice rinks. Another Weisselberg son works for a company that has extended loans to the Trump Organization. Both are under scrutiny by the D.A. for possible unreported financial benefits, while Allen Weisselberg himself may have income tax fraud problems. All by way of understanding that Cyrus Vance has a big spatula under the Weisselbergs, to flip them like flapjacks fully cooked on one side.
Posted by J.W. Williamson at 5/26/2021 08:55:00 AM
Email ThisBlogThis!Share to TwitterShare to FacebookShare to Pinterest
Labels: Donald Trump