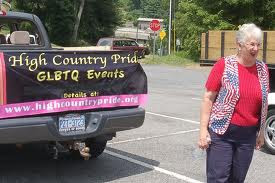 It's the only logical explanation for this:

Capitol Police reported that Foxx exited the elevators to access the House floor for a vote Thursday.

The 77-year old Republican then "ran through the magnetometer" and "threw her bag underneath the table" next to the metal detectors and "loudly stated she was late for a vote and not slowing down."

Two officers then raised their hands and said "Ma’am" in an attempt to stop Foxx. She reportedly ignored the officers and entered the House floor.

The report submitted to the House Ethics Committee said the officers then observed Foxx while she was in the House chamber to cast her vote.

Foxx then returned to the security screening station to collect her bag and complete the required security check, reportedly telling the officers "good thing no one stopped me."

Foxx has been slapped with a $5,000 fine for evading the magnetometer.

Posted by J.W. Williamson at 5/20/2021 09:16:00 AM
Email ThisBlogThis!Share to TwitterShare to FacebookShare to Pinterest
Labels: Virginia Foxx