With Democrats in unified control of Virginia since the elections of 2019 (governor and both houses of the state lege), they made easier access to voting their top priority, and look at what they accomplished:

Open absentee voting for anyone who wants to cast a ballot early or to vote by mail, not just those who have an acceptable excuse. Almost 60 percent of voters cast absentee ballots last year.

Repeal of Virginia’s mandatory photo ID rule, making registration near-automatic through the DMV, and passage of a state-level voting rights law that creates a stricter review process for any local election changes that might discriminate against racial or linguistic minorities.

A proposed constitutional amendment that, if approved by voters, would automatically restore felons’ voting rights upon release from prison.

Legislation allowing same-day voter registration is scheduled to begin for the 2022 general election. 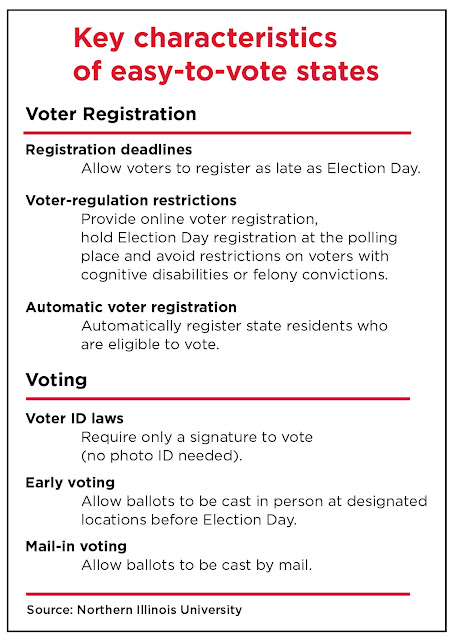 Posted by J.W. Williamson at 5/04/2021 10:27:00 AM
Email ThisBlogThis!Share to TwitterShare to FacebookShare to Pinterest
Labels: Virginia-State of, voting rights