The Cowardice of Richard Burr 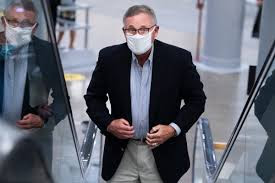 Senator Richard Burr made sure he had to be somewhere else yesterday, when the vote on a January 6th Commission came up in the US Senate. He had an unavoidable conflict, his office said. Burr was one of 11 US senators -- all Republican -- who skipped out, because they knew what was the right thing to do and had no stomach for actually voting against the right thing. So they ducked out. (All 11 are listed below.)

Once upon an odd time, Burr had the courage to vote for Trump's conviction in his second impeachment trial. What happened afterward? He was shunned. Former U.S. Rep. Mark Walker, who is running for Burr’s seat, sent out a fundraising appeal immediately after the vote. “...I am running to replace Richard Burr because North Carolina needs a true conservative champion as their next senator,” Walker tweeted. U.S. Rep. Dan Bishop (don't get me started) said in a tweet that he supported an immediate censure vote. Yes, I know the NCGOP did censure Burr's ass, so I guess he's now (and forever) one cowed suit (with open-necked collar).

When they voted to censure him, Burr issued a statement calling it "a sad day" for NC Republicans: “My party’s leadership has chosen loyalty to one man [do you think he means Trump?] over the core principles of the Republican Party and the founders of our great nation."

He found his balls once, long enough to vote for impeachment. But martyrdom ain't for everbiddy. Maybe it's the rare senator who can think, while simultaneously going out the door, that he needs to pull down the Temple behind him. "What the hell! They've done their worst to me. I might as well shoot the moon." He could have voted to form an investigative commission to find out how a violent invasion of the Capitol happened, but he ducked out the backdoor.

Meanwhile that other North Carolina waffles-and-chicken senator, Thom Tillis, showed up and voted to ditch any investigation. "Tillis called the commission a partisan endeavor — despite its even makeup and rules requiring bipartisan buy-in for subpoenas" (Brian Murphy). Tillis has the courage of his talkingpoint.

I have always admired those elected officials I have personally known (and know now) who focus on doing the right thing for the people they were elected to serve and honestly do not care if they are re-elected. Granted, the ones I have known have mostly been at the local level; but I've known a few congresspeople - John Lewis comes to mind - in that respected group, as well.