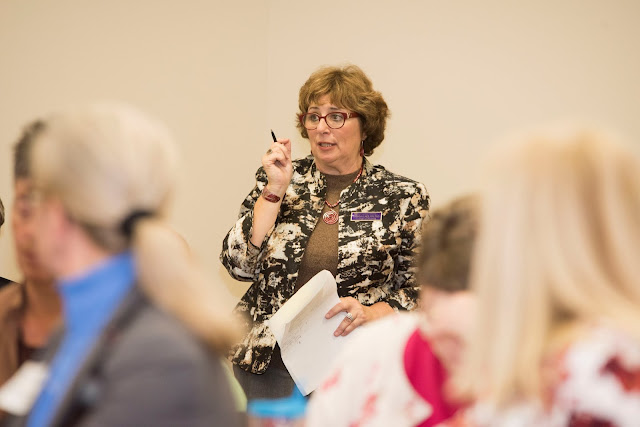 Democrat Donna Lake of Goldsboro announced her candidacy for the North Carolina Senate on July 29th. She's another of a distinct trend among new, insurgent Democratic candidates in the Age of Trump: A woman combat vet stepping forward to run in a forbidding new combat zone. Donna Lake is not only a retired USAF Colonel, with two Bronze Stars, holding a freakin' Ph.D. to boot in Health Care Management, but she's also a clinical nursing professor at the ECU College of Nursing where she says she's taught 450 students, not to mention another 85 faculty, in patient safety principles, leadership, and finance skills. Her expertise in health care management contributed to the awarding of a $5M grant to train and place "advanced practice registered nurses" into primary care facilities in Eastern North Carolina rural communities. A vital and motivating statistic for Donna Lake: Of the 41 Eastern NC counties combined, 28 (68.3%) have fewer than 5 primary care physicians per 10,000 residents. She wants to change that.
She lives in Goldsboro with her husband, a retired USAF pilot, where they raised their two grown children.

Curiously (because of her experience in health care management), her website doesn't say a word about the importance of expanding Medicaid in North Carolina. In fact, her website dishes up mere pabulum on "issues" and nothing specific on pretty much anything. You'd certainly expect more sinew -- political protein -- from an Air Force combat veteran twice decorated "for heroic achievement, heroic service, meritorious achievement, or meritorious service in a combat zone" (what a Bronze Star represents).

Senate District 7
Don't know for sure, but I doubt NC Senate District 7 -- Wayne and Lenoir counties -- will be changed by the most recent round of court-ordered redistricting. (It was already significantly redrawn just prior to the 2018 elections into its present Lenoir plus Wayne configuration. Any more redrawing this year would seem just plain cruel.)

The 7th contains the urban and semi-urban municipalities of Goldsboro and Kinston, and embraces the sprawling Seymour Johnson Air Force Base as well. The district used to be racially gerrymandered like a writhing Chinese dragon through three different counties. It's compact now and at least numerically on paper it ought to be a pickup opportunity for Democrats.

Democrats should be able to win Senate District 7, especially with grandfatherly Louis Pate gone from the picture. Pate had been the 5-term Republican incumbent who won the redrawn, more heavily Democratic district in 2018 and retired in January. Pate lucked out last year when the recruited Democratic candidate Barbara D'Antonio withdrew after the primary, and was replaced late (in August) by a perfectly nice retired District Court Judge David Brantley, who even coming into the race late and being perfectly nice, got 46% of the vote against Pate. Can a strong Democratic woman flip the district in 2020?

The Current Republican Incumbent
Jim Perry from Kinston, a retired rep for the dental industry, CEO of a "Dental Service Org with 240 locations in 40 states and over 2,500 employees," and personnel consultant for the Acute Care Industry, was appointed to Louis Pate's seat last January. We frankly wouldn't expect a senator with that business background -- very much on the corporate end of health care -- to come out for expanding Medicaid to poor people.

What he has been a big supporter of in his few months in the Senate is House Bill 370 -- a law that would force county sheriffs in North Carolina to do the work of ICE agents, with specific provisions to make sheriffs subject to removal from office for refusing to help ICE -- the bill which Governor Cooper vetoed on August 21 with the following statement:

"This legislation is simply about scoring partisan political points and using fear to divide North Carolina. As the former top law enforcement officer of our state, I know that current law allows the state to jail and prosecute dangerous criminals regardless of immigration status. This bill, in addition to being unconstitutional, weakens law enforcement in North Carolina by mandating sheriffs to do the job of federal agents, using local resources that could hurt their ability to protect their counties."

If you need any further evidence of the psychic headspace occupied by Senator Perry, he's been heartily endorsed by Lieutenant Governor (and governor candidate aborning) Dan Forest. And why not? They were obviously separated at birth.