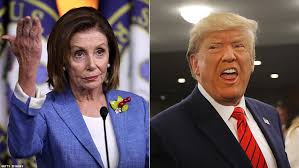 This is what Donald J. Trump said to the president of the Ukraine on July 25th, word-for-word and in an official transcript produced and released by the Trump White House today:

I would like you to do us a favor though because our country has been through a lot and Ukraine knows a lot about it. I would like you to find out what happened with this whole situation with Ukraine, they say Crowdstrike ... I guess you have one of your wealthy people … The server, they say Ukraine has it. There are a lot of things that went on, the whole situation. I think you’re surrounding yourself with some of the same people. I would like to have the Attorney General call you or your people and I would like you to get to the bottom of it. As you saw yesterday, that whole nonsense ended with a very poor performance by a man named Robert Mueller, an incompetent performance, but they say a lot of it started with Ukraine. Whatever you can do, it’s very important that you do it if that’s possible....

...I heard you had a prosecutor who was very good, and he was shut down and that’s really unfair. A lot of people are talking about that, the way they shut your very good prosecutor down and you had some very bad people involved. Mr. Giuliani is a highly respected man. He was the mayor of New York City, a great mayor, and I would like him to call you. I will ask him to call you along with the Attorney General. Rudy very much knows what’s happening, and he is a very capable guy. If you could speak to him that would be great. The former ambassador from the United States, the woman, was bad news, and the people she was dealing with in the Ukraine were bad news so I just want to let you know that. The other thing, there’s a lot of talk about Biden’s son, that Biden stopped the prosecution and a lot of people want to find out about that so whatever you can do with the Attorney General would be great. Biden went around bragging that he stopped the prosecution so if you can look into it ... It sounds horrible to me.

That's the heart of an astounding Moment of State. The admission, delivered to President Zelensky in tough-guy-leaning-on-an-inferior switchblade style -- "I've been awful good to you, and now it's time for you to be awful good to me" -- by the President of the United States, the representative of all us people on the world stage, where up til now surely no world leader ever attempted such baldfaced extortion of another world leader without also being simultaneously a character in an airport paperback thriller. Trump released this transcript today to the world with the "I dare you to say I can't do as I please" aplomb of a mob boss. Nothing to see here, bitches! Except the work of a very stable genius conducting a perfect phone call.

1. The "you owe us" declaration comes at the beginning of the conversation. "We do a lot for Ukraine." Between that opening and Trump's very next opportunity to speak -- he has to wait through what he's always willing to wait through -- fawning praise of his greatness. Zelensky's ass-kissing, the groveling before a superior Being, is just the style that world leaders now ape to please the Twitterman, to get on his good side, and to get what they want. And why not? It seems to work just fine. So immediately after "you owe us" comes "I need you to do a little something," followed by a somewhat typical Trump word-salad -- near-incoherence scrambled with the croutons of mysterious references and half-uttered conspiracy theories.

“The Internet security company CrowdStrike analyzed the DNC Russian breach and on June 15 [2016] pointed the finger at Cozy Bear and Fancy Bear, two groups of hackers who ‘engage in extensive political and economic espionage for the benefit of the government of the Russian Federation and are believed to be closely linked to the Russian government’s powerful and highly capable intelligence services.' ” (Hattip Aaron Blake)

3. "A very poor performance by a man named Robert Mueller." This call happened on the very next day after Robert Mueller testified before Congress about his investigation. If that isn't a tell! Trump was feeling empowered -- justifiably, as it turned out. "I got away with it! They can't touch me. I'm invincible." This phone call distills his grandiosity.

Aaron Blake: The “prosecutor” to whom Trump appears to be referring is former Ukraine prosecutor general Viktor Shokin. He was forced out thanks to widespread opposition both in the West and within Ukraine. The country’s parliament forced him out in 2016. Trump appears to like him, though, because he was at one point looking into the energy company that employed Joe Biden’s son Hunter Biden. The elder Biden’s pressure on Ukraine to oust Shokin is the source of the Trump team’s allegations; they argue it was corrupt, even though U.S. and Ukrainian officials have said the investigation of the company, Burisma Holdings, had been dormant at the time.

Aaron Blake: This refers to Marie Yovanovitch, the former U.S. ambassador to Ukraine who was recalled in May. That recall came after Ukraine’s prosecutor general, Yuriy Lutsenko, made an allegation against her in the U.S. media that he later walked back. Democrats have alleged this amounted to a “political hit job.”

7. "A lot of talk about Biden's son." Bingo. Finally got to the real quid in this pro quo.


When has an international bribery attempt been more obvious, more blatant, more nakedly threatening, especially as just days before, Trump had decided to withhold some legislated foreign military aid that Ukraine was scheduled to receive? That's the other shoe waiting to drop on President Zelensky. "I just wanted you to have a little verbal reminder first, O Buddy-Boy Zelensky: The United States has been very very good to Ukraine. I wouldn’t say that it’s reciprocal necessarily." If you don't do me this favor, you could find the equivalent of a horse's head in your bed, come morning.