Another 2019 Bellwether Election: Governor of Kentucky


Republican Matt Bevin is the Governor of Kentucky. Elected in 2015, he's coming to the end of his first term. Used to be ... Kentucky didn't allow their governors a second term, but that was repealed in 1992. So Bevin is running for reelection as a rare bird, as only the third Republican Governor of Kentucky since World War II. The only Republican governor before him who was eligible for reelection to a second term, Ernie Fletcher, was defeated by Democrat Steve Beshear in 2007. One-term-and-out. That's the pattern for Republican governors of Kentucky, and Gov. Bevin looks right now like he ain't gonna deviate from the pattern.

According to Patrick Caldwell, Bevin's reelection campaign is "flailing." He's unpopular -- last listing I saw said Bevin's approval rating is at 33% -- and he's pissed off the lieutenant governor (a fellow Republican), the attorney general (a Democrat, son of the last Democratic governor, and the man running against him this year) and worst of all, he pissed off Kentucky's teachers.

A lot of the establishment Kentucky Republican Party doesn't like him either. His first dive into Kentucky Republican politics -- as an acid-washed Tea Partier in 2014 -- was to challenge the supremacy of Mitch McConnell. Yes, Bevin ran against McConnell in the Republican primary and got his ass whipped good. McConnell beat him by 25 points after calling him an “East Coast con man” (Bevin's a native of New Hampshire. No kidding). Bevin got so mad at McConnell's counterattacks he refused to endorse McConnell for the fall election. That kind of shit leaves stains. Bevin whined: “You can’t punch people in the face, punch people in the face, punch people in the face, and ask them to have tea and crumpets with you and think it’s all good.” Make a note of the whining. It'll show up again.

How to put this nicely? Bevin is amazingly trumpy. (His introductory campaign ad is about Twitterman almost as much as it's about Bevin.) He casually reveals his prejudices even while pretending empathy for people he clearly has zero interest in. Here he was in July, in that section of town:

295 people are talking about this

Ignorance just naturally goes nicely as a side-dish to open prejudice. Bevan's an aggressive anti-vaxxer. He blamed video games for the Parkland school shooting. He can be a jerk and whine at the same time (Facebook video where he goes on and on about how unfair the attacks on him are). His own Republican lieutenant governor is suing him. “Pray for me as I battle dark forces,” she tweeted. Bevin retaliated and dropped her from his ticket. He was booed at the Kentucky Derby last May.

"But Bevin’s biggest mistake may be spending the past two years picking fights with public school teachers. He successfully pushed a law to allow charter schools, saying he wanted to 'end the monopoly that exists in Kentucky’s school system,' and he’s attempted to weaken pension benefits for public employees" (Patrick Caldwell). As teachers pushed back, they got organized and they got strong. They joined other striking teachers in West Virginia, Oklahoma, and Arizona in 2018 and essentially shut down a special session Bevin called of the legislature, a special session dedicated to cutting teacher pensions. Teachers gathered by the hundreds in the state capitol in Frankfort, and the legislature folded -- just like that. They went home, their tails tucked. Through all the teacher protest, Bevin responded by insulting ever more people in ever more personal ways.

Here's the kicker: According to a past president of the Kentucky Education Association, more than half of KEA's members are Republicans. They belong to Republican families -- sometimes extended families -- in Kentucky's grassroot counties. The biggest local employer is the school system in many of those counties. If teachers take a disliking to you, you might begin to smell like toast. 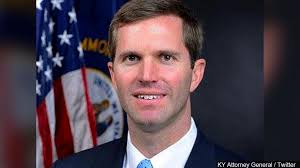 Andy Beshear is the elected Attorney General of Kentucky, and as such, he's spent a fair amount of his time challenging Governor Bevin's initiatives in court. He came to the aid of higher education and of public school teachers, defending them from what he said in court was Bevin's overstepping his constitutional role. Now they're in a virtual death-match for governor.

The 42-year-old Andy is son of Steve Beshear, the last Democratic governor (who incidentally got reelected to a second term). He's no flaming liberal. He's got an 86% rating by the NRA. And if anything he's in the pro-business branch of the Democratic Party. As a young lawyer (UVa School of Law), he represented the developers of the Blue Grass Pipeline through the state, and those were fracking dollars. But he's also repeatedly sued opioid manufacturers on behalf of the victims, and he's defended Obamacare, which was initially responsible for getting thousands of people insured before Gov. Bevin started yanking the rug out.

He might be the brand of business-friendly, gun-friendly yet crusading attorney that can win in conservative Kentucky. While governor for two terms, his father built up a Democratic support network that no doubt benefits the son. Hard to put a dollar value on that network.

Most recent poll I've seen (Gravis Marketing) has Bevin leading Beshear by 6 points, but with Beshear doing better than Bevin among women and college-educated voters. That overall lead for Bevin doesn't comport with a 33% approval rating, and as we near November, I expect to see that 6-point lead shrink. If Bevin loses, it'll be seen as a bellwether for Trump's 2020 prospects.