This Friday the Thirteenth Might Be the Unluckiest Day for Jerry Falwell Jr.

What's happening up at Liberty University today in Virginia? A student protest, that's what. Organizers are saying that if even 60 students show up, it'll be a massive show of resistance to a school president increasingly exposed for evident corruption of Christian principles, a kind of religious strong-man who has ruthlessly suppressed dissent on his campus in the past.

The students are reacting to a blistering investigative piece published by Politico on Monday of this week. That, plus what has been passed around on campus in the form of hot rumors for years about Falwell's behavior (including sexual pole-vaulting and authoritarianism). The students organizing today's protest "have seen a shift in the student body against Falwell that hasn’t been seen in the school’s recent history. 'The mood is changing from "We wish Jerry would keep quiet" to "We wish we had better representation for our school,' " [one of the student leaders] said. 'Jerry doesn’t have our best interests at heart. He doesn’t share Liberty’s mission statement to train champions for Christ.' ”

The article about the protest published by the Religion News Service prompted me to go back and find the Politico article that sparked it, and it's a doozie:

...they depicted how Falwell and his wife, Becki, consolidated power at Liberty University and how Falwell presides over a culture of self-dealing, directing university resources into projects and real estate deals in which his friends and family have stood to make personal financial gains. Among the previously unreported revelations are Falwell’s decision to hire his son Trey’s company to manage a shopping center owned by the university, Falwell’s advocacy for loans given by the university to his friends, and Falwell’s awarding university contracts to businesses owned by his friends.

“We’re not a school; we’re a real estate hedge fund,” said a senior university official with inside knowledge of Liberty’s finances. “We’re not educating; we’re buying real estate every year and taking students’ money to do it.”

My concern now shifts to Falwell's local Gestapo -- the Liberty University Police. Will they shut down the student protest? How many will show up and be brave? We'll be looking for news about this during the rest of today and into tomorrow.

Footnote: One of the best things about the Religion News article is that it was written by Will Young, the former student editor of the Liberty University newspaper whom Falwell censored. We wrote about Will back in July -- "Surviving Liberty University (and finding liberty)." 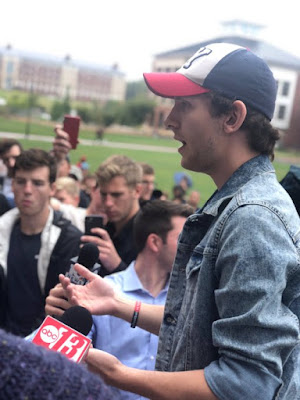 Posted by J.W. Williamson at 9/13/2019 11:04:00 AM
Email ThisBlogThis!Share to TwitterShare to FacebookShare to Pinterest
Labels: Jerry Falwell Jr., Liberty University, religion and politics, Will E. Young