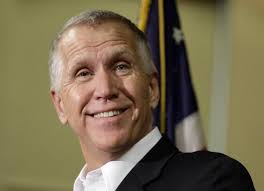 Trump then paid off Tillis in June, telling his nearly 64 million Twitter followers that Tillis had “really stepped up to the plate.” (When he can't get dictators to fawn over, Trump'll love up on abject toadies who kiss his ass.)

So, natch, Tillis appears to be floundering in his reelection bid. He may not even make it to November. Conservative Garland Tucker is challenging him in the March primary and seems to be gaining traction. Nobody loves Tillis, except maybe the former executive director of the NC GOP, Dallas Woodhouse.

It was a lame-ass move to boost up Tillis, FWIW -- which ain't much.