Four Women To Watch in North Carolina in 2020 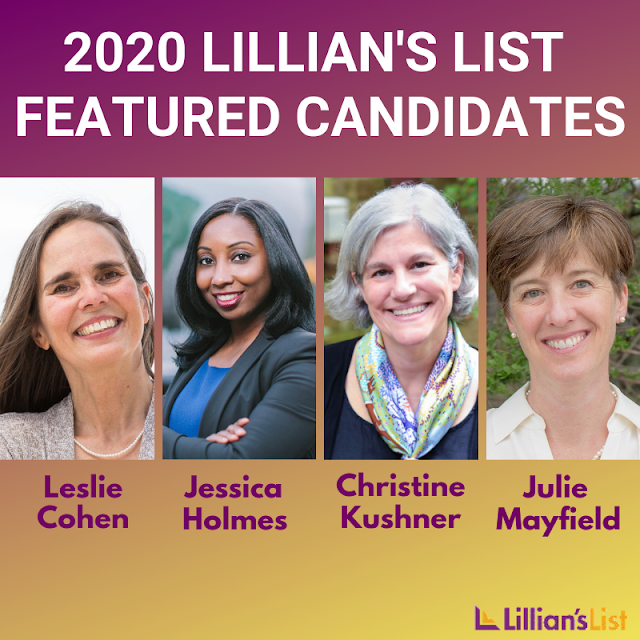 Lillian's List candidates in North Carolina get significant financial support and a boost from a network of activists and opinion-shapers across the state.

I've written here about Leslie Cohen back in July, because she's running again in 2020 in the House district currently occupied by Republican Holly Grange, who at the time of that writing was only considering a campaign for the Republican nomination for governor. Grange is now in that race against Dan Forest, leaving her House District 20 in Wilmington an open seat. Cohen has an excellent shot at that.

I wrote about Julie Mayfield in June. She had announced for the Senate District 49 that is being left open by incumbent Democrat Terry Van Duyn's decision to seek election as lieutenant governor. Mayfield has the makings of a Democratic star. She's currently serving on the Asheville City Council and is an environmental lawyer deeply invested in MountainTrue, an advocacy group that stretches through several North Carolina mountain counties.

Jessica Holmes is new to me. She's running for Labor Commissioner, a seat being left open by the retirement of Republican Cheri Berry. Holmes is well qualified to take on that department. She was a first generation college student who graduated from UNC's law school and became a labor and employment law attorney. She was elected to the Wake County Commission in 2014 as the youngest member ever and is now serving in her second term. After reelection she was chosen by her fellow commissioners as chair of the county commission. You can read much more about her accomplishments on her website.

Christine Kushner is also new to me, although I inadvertently stumbled onto her when I wrote encouraging Mack Paul, the almost-successful Democratic candidate in 2018 for the NC Senate District 18, to try again in 2020. What I didn't know at the time, but quickly found out, was that Mack Paul was endorsing Christine Kushner for that seat and an old friend of ours was running her campaign. Kushner has been a popular member of the Wake County Board of Education since 2011. She was a Moorhead Scholar at Chapel Hill, graduating with a degree in journalism (which she pursued professionally for a while) and political science. She went on to earn a master's degree at the Woodrow Wilson School of Public and International Affairs at Princeton and has spent many years working and advising on health care policy, grants management, and public health programs throughout North Carolina. Her website.

Good first crop of Lillian List endorsees -- accomplished and strong women with every prospect of helping make 2020 a Blue Wave.