This Is Not the Texas I Grew Up In


As a son of the Texas Panhandle, I take more than passing interest in what looks increasingly like a resurgence of Democratic prospects back there for 2020 -- not in the actual Panhandle of Texas, which is redder than a baboon's ass, but in the urban centers and their suburbs where most of the voters live.

Take the 22nd Congressional District of Texas, the district that Tom Delay used to represent and is now a bizarre gerrymander to the south and west of the beltline expressway around Houston known as Texas 8. 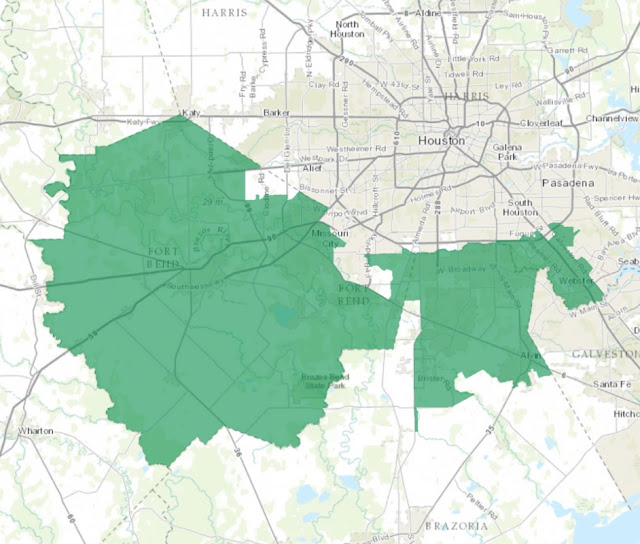 District 22 contains most of Pearland and Sugarland and all of Rosenberg. I-69 cuts through the heart of it, linking Houston to its southwest burgeoning suburbs. District 22 used to be solid Republican country. (Tom DeLay was its maester for many years before he succumbed to the White Walkers.) But with the sudden retirement of its incumbent Republican five-term Rep Pete Olson back near the end of July, the Cook Political Report moved the district to tossup. (Rep. Olson is one of several Texas Republican congressmen who has chosen early retirement over the headwinds his political heavy-weather radar sees building in the atmosphere.)

Multiculturalism: The Texas Threat to Everything Dan Forest* Holds Sacred
The Democrat already in the Texas-22 race -- he also ran in 2018, and snuck up on Pete Olson in a heartstopping insurgency, losing by a comfortable-enough 14,500 vote margin to Olson (47% to 51%), but considering his heritage and brown pigmentation, the 138,153 votes that Sri Preston Kulkarni earned in 2018 were pretty damn impressive. He promises to do better in 2020, and the Cook Political Report obviously agrees.

Who is Sri Preston Kulkarni? He's the son of an Indian immigrant father -- "Sri" being a Hindu honorific -- and a mother -- Margaret Preston -- who's a direct descendant of Sam Houston hisownself. No kidding! A son of a brown immigrant wearing a Hindu headlight for a name gets 47% of the vote in red Texas, not only because Sri Preston Kulkarni also carries a direct bloodline to the Texas Revolution but because Sri Kulkarni was a gawd-damn accomplished foreign service officer with 14 years of experience and a speaker of English, Spanish, Hebrew, Hindi, Russian, and Mandarin Chinese.

Incidentally, Texas-22 has evolved into a kind of multicultural haven, and is still evolving. "The district is 26 percent Hispanic, 19 percent Asian and 12 percent black, and 43 percent of adults hold college degrees, among the highest in the state" (David Wasserman, Cook Political Report). Not good soil any more for Trumpist seeds. More fertile for a candidate like Sri Preston Kulkarni. Take a look at his website -- Kulkarni for Congress.

The Texas-22 goes on my list of most avidly watched flippable districts in the #2020BlueWave.


*Dan Forest is the Christian Right Republican frontrunner candidate for Governor in 2020. He has a Republican primary first (in March 2020) against moderate Republican NC House Rep. Holly Grange. He has made an issue of "multiculturalism," claiming it means the death of the country he wants to run. He's not wrong about that.

She is not a direct descendant of Sam Houston, probably not even a distant collateral descendant.