I Never Pay Attention to Polls


I took a vow approximately 45 quad-shot skinny lattes ago not to pay attention give any actual credence to polling about any election that is more than a year away hasn't happened yet, but okay I get weak sometimes, and this new Fox News poll has caught my attention and not only because it's FOX NEWS, though that's a lot of it. 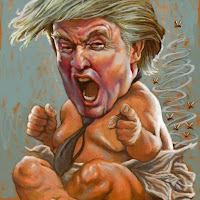 But there's something else interesting: Although he gets 38 to 39% in all four matchups, his approval rating is actually 43%. "That means roughly 4 percent of registered voters say they approve of Trump but they’re not ready to vote for him" (Aaron Blake).

Some are calling it "Trump fatigue." People even slightly to the left of Louie Gohmert worry that people won't stay woke to all the outrages -- because when everything's an outrage, there is no outrage -- and hence will forget to vote next November. I don't think that's a legitimate worry.

The Fox News poll suggests that Trump fatigue may be working more directly on the minimum wage waitress who thought she'd "give Trump a chance" back in 2016. How did that work out for her? Maybe she doesn't actually hate immigrants and brown people, and how has the constant romper room hissy fits by the toddler in the White House actually improved her situation?

Everyone's not as dumb as Trump thinks we are.