Who Got the NCGA Office That Rep. Ray Russell Was Evicted From? 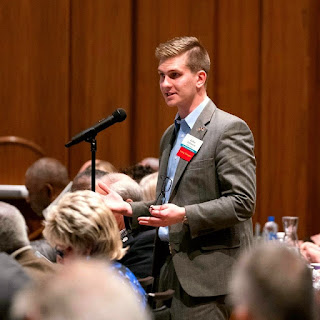 That would be Rep. Jake Johnson, the newest (and now youngest) member of the NC House, appointed at the end of July to finish out the term of Rep. Cody Henson (previously the youngest member). Henson resigned his seat after admitting in court to cyber-stalking his estranged wife.

Jake Johnson is a pet of the Republican establishment, and we can see why. He's a rare bird, a talented millenial who's all in for the conservative brand. Johnson checks all the boxes: acidly pro-life, pugnaciously pro-NRA, and piously pro-family.

He's also politically accomplished: Ran for county commish of Polk County at the age of 19, lost but came back in two years to run again and win (highest vote-getter among commish candidates). It wasn't long before his fellow commissioners voted him chairman of the board, making him officially in Republican circles A Force To Be Reckoned With. He was the obvious choice to replace the other conservative millenial, the out of control Cody Henson, in the NC House -- that cow palace on Jones Street in Raleigh where the newest Republican wunderkind was going to need an office, which -- turned out -- was just coincidentally already occupied by Rep. Ray Russell, who also just coincidentally needed punishment for being a too uppity freshman legislator.

Jake Johnson claimed that he went to college (the year after he lost that first race for co commish) to get a degree in business administration but that Barack Obama in the White House was the straw that broke his business back. He switched to political science out of revenge for Obama and became an avowed partisan warrior against what America was becoming under a president who might have been -- probably was -- born in Kenya. I found on-line where he was scheduled to speak to the Asheville Tea Party back last January on the "steps we are going to have to take to get younger people into conservative politics." (I wish I'd heard that rap!)

Here's the passage in Johnson's biography that's almost forgotten: He says he served as "field director" for the successful congressional campaign of Mark Harris. That would be the Reverend Mark Harris, whose winning campaign against Democrat Dan McCready in November of 2018 was called back to be redone because of massive ballot fraud committed -- wait for it -- in the field operation.

Question: Did Jake Johnson know McCrae Dowless? Did he as Field Director know what McCrae Dowless was up to? And does his experience on the Mark Harris campaign still deserve prominent mention in his resume?