The Greatest Moment From SOTU2019 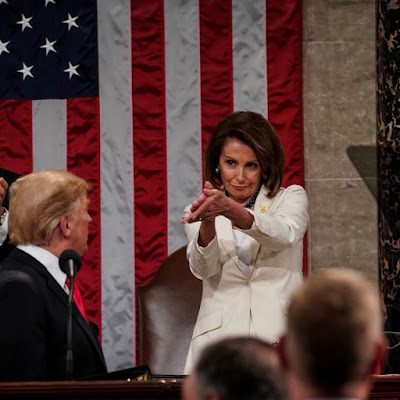 And a look that will be on T-shirts before the close of business today!

Did you notice how often Twitterman turned to his left, checking out in his peripheral vision whether Nancy Pelosi was reacting correctly to his applause lines? Here's what he said that occasioned this memorable moment in SOTU history:

“We must reject the politics of revenge, resistance and retribution and embrace the boundless potential of cooperation, compromise and the common good.”

At the moment captured by the photo, Trump is actually mouthing "Thank you!" to Pelosi, completely missing the subtext of her mockery.

Why mock that line in his speech?

Because this is "a president who proudly retaliates against his enemies, taunts his political foes with nicknames and considers himself one of the world’s great counter-punchers" (Philip Rucker et al.).  Just yesterday, during a lunch with major print and broadcast journalists, Trump had "assailed Senate Minority Leader Charles E. Schumer (D-N.Y.) as a 'nasty son of a bitch,' ridiculed former vice president Joe Biden as 'dumb' for his history of gaffes, and accused Virginia Gov. Ralph Northam (D) of 'choking like a dog' ” (Rucker).

Last night, it was Teleprompter Trump, who reads high-minded, normal-sounding lines like he's reading a hostage statement, while we all know the real man. Nancy Pelosi is drawing a bead.

DJT never appreciates irony though he's a great creator of it.