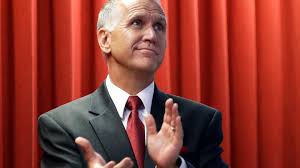 Thom Tillis, running for reelection into the teeth of a strong headwind, issued a statement opposing Trump's emergency declaration yesterday. Mighty brave of him. And he started the text with a blunt “It doesn’t matter who the President is...."

Oh really? We'll see about that when Tillis is actually called on to vote on the legitimacy of Twitterman's going around Congress to fund his vanity project on the southern border. And no doubt about it. Senator Tillis will be called on to vote his conviction in this matter.

Posted by J.W. Williamson at 2/16/2019 11:13:00 AM
Email ThisBlogThis!Share to TwitterShare to FacebookShare to Pinterest
Labels: Donald Trump, Thom Tillis