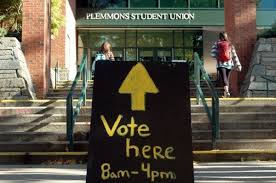 This is news. Big honking news. Not because the top lawyer for the UNC System says university IDs can't comply with the state’s new photo ID law, but because he's wrong. At least he's wrong for Appalachian State University.
As part of its new Voter ID Bill, the state legislature determined that university IDs would qualify as valid proof of identity at the polls as long as the universities complied with certain criteria (Senate Bill 824). The State Board of Elections created both rules and a form for certifying compliance with this criteria. The "attestation form" must be signed by university officials no later than March 15th to qualify a university’s student IDs as valid proof of identity. If the attestation form is not signed by March 15th, that university’s student IDs will not count as valid proof of identity for elections through 2020.

Here’s a link to the rules: https://s3.amazonaws.com/dl.ncsbe.gov/Rulemaking/PublicNotice8Feb2019.pdf. Form is copied below.

When student activists and others began their approach to ensure that Chancellor Everts would meet the deadline for signing the attestation form, they heard varied reasons why the form could not be signed. Everts cited -- or those close to her have cited -- a problem with the citizenship declaration, a problem of no present expiration date on the ID, a problem with photos, a problem with the collection of SSNs. Those "problems” have all been debunked consistently by lawyers (other than the lawyers who work at the UNC System) as a (willful?) misreading of the form.

Turns out the universities have now banded together under the interpretations offered by Thomas C. Shanahan, Senior Vice President and General Counsel for the UNC system, to refuse to sign the attestation, regardless of whether an individual university can comply or not. If none comply, then individual university leadership is insulated. If one or more do comply, the others are exposed for harsh criticism.

The heat has turned up anyway on Chancellor Everts. So much so that on Friday she sent out a statement university-wide asserting her commitment to student voting rights, and while the email reads more like a precursor statement for refusing to sign the form, she also asked for additional input from all interested parties. It's good she asked.

In an attempt to get control of the narrative, on Friday, February 22, Mr. Shanahan weighed in on the “attestation crisis.” Shanahan told a meeting of professors in Chapel Hill that while the system seeks to promote UNC students’ ability to vote, none of the 16 campuses currently meets requirements that the law demands of universities for student identification cards to count as valid voting identification.

Let me repeat that: According to Mr. Shanahan yesterday, none of the 16 campuses currently meets requirements for voter photo ID.

After the law was passed (one wonders, why not before?), Shanahan explained, the UNC system office consulted with campuses across the UNC system (most of that consultation was likely lawyer-to-lawyer). He stated that the requirements that must be met for attestation were steep. And chancellors, he repeatedly emphasized, must, according to the law, make this attestation under penalty of perjury. (More on those requirements in subsequent posts, but I will note here that lying on any such legal document would be under penalty of perjury. So what?)

After saying he has consulted with the 16 campuses, Shanahan concluded that “no institution meets the requirements” under the voter ID law. For Shanahan, the question is whether campuses are actually already doing the things the law expects them to do. As he put it, “Do [campuses] have these procedures so they can say substantively, ‘Yes, we are doing this’?”

As that question pertains to ASU, the answer is “yes."

For other universities, there may indeed be a problem. Some institutions allow students to select their own ID pictures — a “selfie” — for their student ID cards. This is true, for example, at UNC Charlotte. Yet the Voter ID law requires chancellors to attest that their identification cards “contain photographs of students taken by the university or college or its agents or contractors.”

Shanahan said that the law is subject to multiple interpretations (duh). And there's the crack in the door, for we know that other authoritative legal interpretations don't see the form the same way. Shanahan claimed that the State Board of Elections (SBOE) has not been forthcoming in providing guidelines. “Ultimately what we need is the actual interpretation of the SBOE that will be binding,” Shanahan said. If he gets that, then the legal assumptions above go away. We are hopeful the SBOE will give Shanahan the assurance he needs. And quickly.

Shanahan emphasized that the UNC system strongly supported encouraging students’ civic participation and said that chancellors are not trying to add a hurdle to the voting process. But saying warm things about student voting and how you believe in the highest of civic virtues, and then refusing to find a way to uphold student voting rights just doesn’t get it.

The UNC System Office, based in Chapel Hill, manages the 17-institution system (16 universities and one high school). It is run by the UNC system president, William Roper, and reports to the UNC Board of Governors, which is appointed by the legislature. 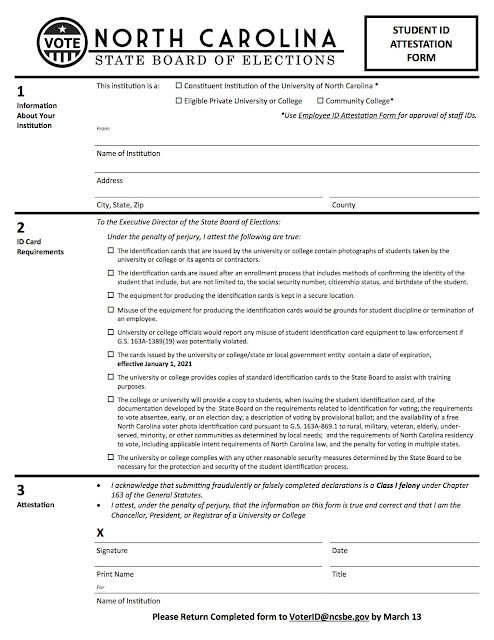