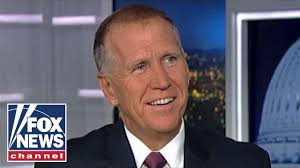 A series of ads purchased by Majority Forward — a non-disclosing 501(c)(4) nonprofit linked to Democratic leadership in the Senate — plans to go after after Sens. Cory Gardner (Colo.), Susan Collins (Maine), Thom Tillis (N.C.), David Perdue (Ga.), Martha McSally (Ariz.) and Joni Ernst (Iowa) with a $600,000 ad buy in mid-January, attacking each incumbent Senator over their role in the 35-day government shutdown.

Each ad follows an identical formula, noting the “the longest ever” shutdown caused issues with government food inspections and plane flights, along with an issue relating to the targeted state and blaming the respective Senator for the length of the shutdown. Each ad links the respective target to Senate Majority Leader Mitch McConnell, who repeatedly blocked bills to reopen the government and is also up for reelection in 2020.

Posted by J.W. Williamson at 2/01/2019 09:19:00 AM
Email ThisBlogThis!Share to TwitterShare to FacebookShare to Pinterest
Labels: 2020 Blue Wave, Thom Tillis

What's sauce for the goose...