Where Was Thomas Shanahan Last November? 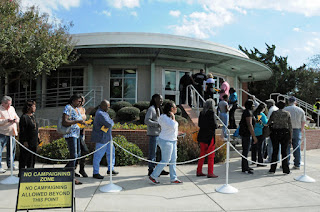 I've been waiting for Thomas Shanahan, General Counsel for the UNC System, to hold a promised press conference and explain himself about disallowing all university system student IDs for the purposes of voting, and I missed entirely that Shanahan issued a statement on Monday (reproduced below). Evidence of it showed up in Travis Fain's reporting for WRAL, and the statement itself has been found.

It contains evidence that Mr. Shanahan does not understand the difference between registering to vote and showing up to vote with photo ID.

He warns in the statement that the UNC System can't ensure the validity of their student IDs to be used as proof of identity at the polls because some of those student IDs are issued to those under 18 years old, to some non-citizens, and to those who don't have a Social Security number. He fails to mention (or understand?) that the student ID can be used as proof of identity for registered voters only. Those who are younger than 18, or who don't have SSNs, and/or who are not citizens cannot register to vote in the first place. Trying to go in and vote with a student ID if you're not already qualified and registered will get you nowhere. Why wouldn't Shanahan understand that?

Plus this: In the public hearing held on the law in the Elections Oversight Committee on November 26 last year, neither Shanahan nor any representative from the UNC System attended to voice any concerns about the language of the law. Reps from the Community College system and reps from NC Independent Colleges and Universities were there and had objections and suggestions to protect their students and ensure their rights to vote using college-issued photo IDs. The UNC System was not there, at least so far as we can tell.

Yet months later the UNC System top lawyer precipitates a major crisis about voting rights for college students. Where was he last November? 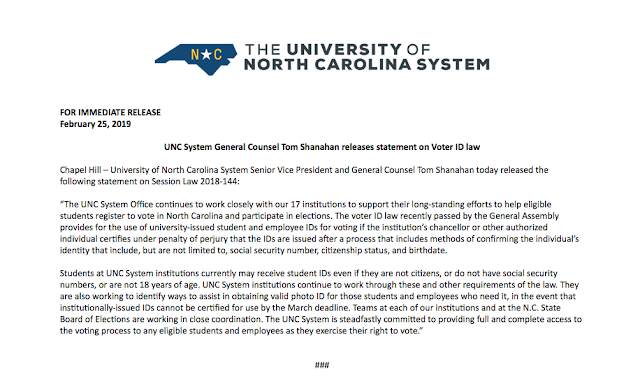 Posted by J.W. Williamson at 2/27/2019 10:07:00 AM
Email ThisBlogThis!Share to TwitterShare to FacebookShare to Pinterest
Labels: Thomas Shanahan, University of North Carolina, voting rights