We Love You, Howard Dean, And Always Will 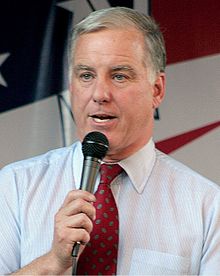 Howard Dean taught us modern campaigning. He pioneered social media outreach and fundraising. As chair of the Democratic National Committee from 2005 to 2009, he preached and enacted the "50-state strategy," an effort to put staff and resources into every state to bolster the grassroots. Which worked. Which lives on today in North Carolina as "a candidate in every single House and Senate district" -- all 120 House seats and 50 Senate seats, contested -- no matter how improbable the prospects, and the literally hundreds of new candidates in every state that are running strong right now, with clear positive platforms, and who owe absolutely nothing to the political establishment.

When he led the Democrats, he encouraged county parties to return to retail politics, one-on-one voter outreach, and he taught everyone the importance of social media for fundraising and for message propagation -- where boomlets happen like lightning. Howard Dean was leading the DNC when Watauga Democrats flipped the county commission from red to blue in 2006, and Cullie Tarleton and Steve Goss won House and Senate seats. We learned so much.

Dean's tenure at the DNC coincided with Jerry Meek's chairmanship of the NC Democratic Party, a renaissance of grassroots activism and retail politics. Jerry Meek came to Watauga and participated in the biggest ever "kickoff canvass" in 2006. Unfortunately, Jerry Meek passed the torch after two terms, and we didn't hardly see his like again, until recently.

Howard Dean made the right kind of enemy. Rahm Emanuel hated his guts. Emanuel favored a different political model that ignored some states -- actually, many -- and poured all the money into boosting the presidential candidate rather than building local parties. Emanuel got rid of Dean as soon as Obama became president. Senator Chuck Schumer participated in that purge. He didn't like Howard Dean either. As far as I'm concerned, Rahm Emanuel was everything that was wrong with Barack Obama's first term, and Chuck Schumer is everything that's wrong with sucking up to money-pimping Democratic donors today, particularly the ones with Wall Street addresses.

Howard stirred excitement among punked-out Democrats and bored independent voters during his presidential run in 2004. It was such excitement. If you were a part of it, you remember it. I see the same vibration around many new Democratic candidates this year. They're rewriting the Party and rewiring the Party brain, just like Howard Dean did.