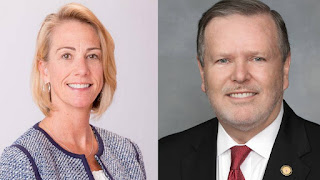 Jen Mangrum, the former Republican who has become overlord Phil Berger's nemesis this year, will see her eligibility to run against Berger litigated by the full state Board of Elections tomorrow. I intend to be there as a witness.

You may recall that Mangrum, a professor at UNC-Greensboro, announced her intention to run against Berger back in 2017. She was a Republican-turned-Democrat who decided she was fed up by the ruthless power-grabbing of Berger and his boys in the General Assembly. She attracted a lot of positive attention from supporters and a lot of negative energy from Republicans.

So what did the Republicans in the General Assembly do? They redrew Berger's district and cut out Mangrum's residence. What did Mangrum do? She leased property and moved so that she could be in Berger's district again. You don't put Jen Mangrum in a corner.

But Berger's allies weren't done. They challenged Mangrum's residency, and a 3-2 panel of Republican and Democratic elections officials ruled against her on party lines. Their need to protect the empire of Phil Berger was palpable.

Her appeal to the state Board of Elections comes tomorrow in Raleigh. She will win on the facts, and the concerted effort to keep her off the ballot and out of Phil Berger's face has only served to make her stronger.

Posted by J.W. Williamson at 7/11/2018 09:04:00 AM
Email ThisBlogThis!Share to TwitterShare to FacebookShare to Pinterest
Labels: Jennifer Mangrum, Phil Berger