Republicans on Watauga Board of Elections Want Polling Places in Churches


Of course they do.

Mount Vernon Baptist Church currently serves as the election day polling place for New River 3, the second largest precinct in Watauga County. It was chosen as the polling place by Bill Aceto and Four Eggers (via Luke Eggers) obviously because...

a. It's as far away from the urban-suburban center of population in that precinct as you can get and still stay in the precinct. It's in the middle of the countryside, miles from the population center and without any public transportation to reach it.

b. It's a hotbed of Republican Party activists who make no bones that you can't be a Christian and a Democrat at the same time. This was the church marquee on the eve of the 2016 election. Voters either drove or walked by it on the way to vote. 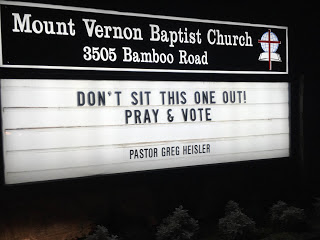 Aside from the obnoxiousness, the inconvenience, the absence of logic, Mount Vernon Baptist Church is the perfect polling place for the 3,989 voters registered in New River 3.

Watauga Board of Elections Chair Jane Anne Hodges proposed moving that polling place back to where it used to be, the National Guard Armory, but Republicans Nancy Owen and Eric Eller weren't having it. In fact, Hodges proposed moving all three polling places currently in churches to non-church sites which would also be more convenient for voters, with easier access and plenty of parking:


Those moves aren't going to happen as long as both Owen and Eller, the Republican members, oppose. Precincts can be moved by majority vote, and both Chair Hodges and the other Democratic member, Richard Rapfogel, want this for the sake of convenience to the public and avoidance of conflict-of-interest or partisan intimidation.