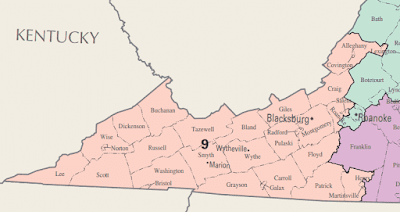 I just took a road trip up into Virginia's 9th Congressional District, which is huge, stretching from Cumberland Gap eastward and northward, taking in over 20 counties and parts of counties and also several major universities including Virginia Tech and Radford. It's the second largest district in the state and includes the coal fields of far southwest Virginia. The district is larger than the entire state of New Jersey.

On Saturday I happened onto a small-town July 4th parade in the district. Except for one -- and only one -- local politician and some dude driving a four-wheel recreational vehicle displaying a "Corey Stewart for Senate" placard, the parade was otherwise completely free of politicians, a remarkable void in itself, I thought.

(Corey Stewart, incidentally, is the white-supremacy-curious Republican candidate for Senate that is causing enormous heartache among mainstream and country club Republicans. There's a big article in this morning's WashPost about the split in the party over Stewart's candidacy. I noticed at the parade on Saturday that no one was applauding the dude with the Stewart placard.)

What I did notice everywhere else I went in the district were "Flaccavento for Congress" signs, from the smallest towns to good-sized cities. Anthony Flaccavento is the Democrat running against the incumbent Republican Morgan Griffith, whose reputation at least among the folks I spoke with is aloofness from his district and a disassociation from its problems. He was first elected in the 2010 Tea Party wave and shares those lack-of-sympathy values. The constant complaint I heard about Griffith: He never comes back to the district. He never holds townhall meetings with his constituents. (Sound familiar, Virginia Foxx?)

Flaccavento is a farmer in Washington County. He ran against Griffith once before, in 2012, and didn't come close. I hear he's much more organized this time around and is working that huge district from one end to the other. He's recruiting 1,000 foot-soldier volunteers and holding 100 town meetings. He's got a populist message for those who'll listen. According to Carmen Forman:


Flaccavento is critical of the Democratic establishment because as he sees it, the party has abandoned working people, especially in rural areas.

“I am going to shout at the Democrats the whole way through this campaign because that needs to change,” he said.

Flaccavento argues that progressives should not ignore rural communities. He launched a website called Rural Progressive Politics this summer to help make his case.

His platform stresses that land, livelihood and community shape the way rural voters see politics and the world, and his campaign will focus on fostering healthy local communities. Flaccavento is an organic farmer, and much of his message stems from his consulting work devoted to growing healthy, sustainable regional economies.

Vigorous local economies means fewer tax breaks for the wealthiest Americans and lower taxes for small businesses, instead of significant tax breaks for major corporations that can afford to pay them, Flaccavento said.

Flaccavento is also an author and has a website which predates his campaign, "Bottom Up Economy, 'Cause Trickle Down Doesn't," where he advances the cause for a resurgence in rural America. His book on rural issues, "Building a Healthy Economy From the Bottom Up," was published by the University of Kentucky Press last year.

The 9th CD of Virginia is still considered "Safe Republican" territory, but we're pulling for Anthony Flaccavento to turn that around in 2018.