Jennifer Lewis, Another US House Candidate to Watch in Virginia


The 6th Congressional District of Virginia looks about as hopelessly Republican as they come. The incumbent Republican congressman, Bob Goodlatte, is retiring, so the seat's open, but the Democratic track record there doesn't suggest a lot of hope. Democrats didn't even field a candidate against Goodlatte in 2000, 2002, 2004, and 2006. In 2008, a Democrat was on the ballot, got 36.6% of the vote, the most any Democrat has ever polled against Goodlatte in his 26 years in Congress.

But the seat's open. The new Republican who won the primary, Ben Cline, has served eight terms in the Virginia House of Delegates and is among the most conservative. He's also young, 46. He earns a living as a lawyer in private practice, which must be a pretty good living because he has offices in Lexington, Harrisonburg, and Amherst, Va. He was co-chair of the Virginia chapter of Americans for Prosperity, which speaks volumes in this high volume age.

Ben Cline should be a shoo-in. Easy peasy.

The Democratic Insurgency of Jennifer Lewis 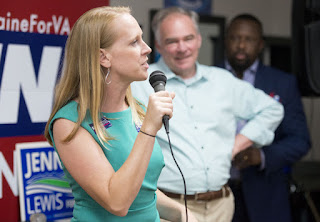 Because the 6th CD seat was open, several Democrats wanted the nomination, but a "bold progressive activist" Jennifer Lewis won it, and she's attracting attention. She's 36, a mental health professional and prominent opponent of the Atlantic Coast Pipeline, supports Medicare for all, a $15 per hour minimum wage, legal marijuana, tougher bank regulations, and an end to corporate “personhood.”

She comes by her populist impulse honestly: "I grew up with that feeling that things aren’t fair in our society. Financially speaking, we were not well off at all. I grew up getting free lunches at school. I grew up with the sense of always seeing the rich getting richer and the poor staying stagnant or getting worse .... We’re speaking about equality for all, health care for all, good education for all, rural broadband for all. We are this very inclusive campaign that resonates with a lot of people who are ready for bold, progressive change in their lives and in their district .... Being a farmer’s daughter is obviously helpful in breaking down some of those walls of farmers thinking they can’t talk about some of those issues" (HuffPost).

She says she will not support Nancy Pelosi for Speaker of the House, if and when there's a change and assuming Jennifer Lewis can be a part of it.

She's on the board of the Headwaters Soil and Water Conservation district of Augusta County, an elected position, and she earned press coverage for her opposition to the Atlantic Coast Pipeline, which put her at odds with the Democratic Governor Ralph Northam. She's against the pipeline because of the use of eminent domain to benefit private industry, because of the environmental threat to water resources, and because of "the political corruption of it all," says Lewis. "You see Dominion [Energy Virginia] writing these checks to Republicans and Democrats, and then they get friendly legislation. The running joke is Dominion owns Virginia. It’s not a funny joke. It’s very sick and it’s very wrong. It’s not how democracy is supposed to work."


Jennifer Lewis will give Ben Cline a race to remember. She'll do it with an army of willing and enthusiastic volunteers. Her ground game for the Democratic primary was intense, and there's reason to believe she'll amp it up this fall. She's intent on registering non-voters -- of which there are a lot in the 6th district -- and she knows the importance of door-knocking. She's an organizer of volunteers from way back, and an inspirer of volunteers.