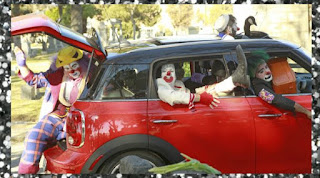 If you're not paying attention to the clown car in Raleigh, you may not know that the Republican overlords called another "special session" last week -- the seventh (?) or eighth (?) in a series since November 2016, when Republican Senate boss Phil Berger began knee-capping newly elected Governor Roy Cooper even before he was sworn in. Each special session costs taxpayers a minimum of $42,000, just for starts, and untold millions in tatters to North Carolina's progressive reputation.

The most recent special session on January 10 caused an uproar because the word got out that the Republicans were going to reorganize the judiciary to make it more congenial for them and their unconstitutional power-grabs. The session was called for a three-day legislating marathon which was also supposed to address the contamination of the Cape Fear River (see below), but lasted exactly one day when the best laid plans of Phil Berger crumbled under public pressure.

Phil Berger dismissed his senate in a snit without taking up the Cape Fear River pollution, but Tim Moore over on the House side decided that maybe they should do something -- some little thing -- about the Chemours plant (previously operating as Dupont). Chemours had been dumping GenX, an ingredient in Teflon coverings for cookware, into the Cape Fear River (until the state Department of Environmental Quality revoked their permit in November), along with other noxious chemicals. The Cape Fear supplies municipal drinking water for towns and cities from Fayetteville to Wilmington.

Chemours is possibly the worst corporate entity operating in North Carolina (and the competition for "worst" is pretty stiff). They had kept secret a lot of their dumping and had failed to report a spill on Oct. 6 that “caused a nearly 100-fold increase in the concentration of GenX” in the river.

Tim Moore and his House of Representatives passed a by-partisan bill that mandated several studies and provided $2.3 million to the DEQ for extra staff and equipment to research potentially dangerous chemicals. According to Colin Campbell, "The key problem with GenX and related chemicals is how little scientists know about them — they might give you cancer, but we don’t yet know for sure."

Safely back in Rockingham County, Berger felt empowered to throw stones at what the House did, without offering to do anything useful himself, and since you know that it takes action by both House and Senate to pass legislation, the Cape Fear River continues to be polluted, the state's judiciary remains unchanged (so far), and if it's not about power-grabbing and dismantling any claim North Carolina once had to being the most progressive state in the South, then Phil Berger wants nothing to do with it.