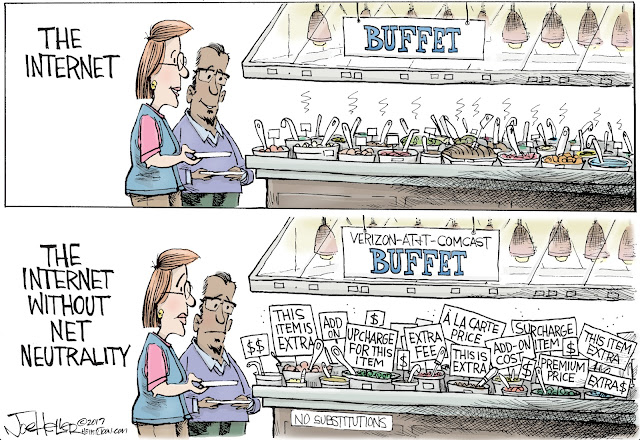 The city of Ft. Collins, Colo., has decided to become an Internet service provider and make available to its citizens broadband as a utility, building out its own infrastructure (thanks for the tip, SM). The city council says it "is committed to the principles of Net Neutrality," adding, "The City Broadband Plan does not call for any restrictions on access including uploads, downloads, delivery methods or providers (email, Skype, Netflix, etc.)."

Nearly 60 percent of Ft. Collins voters approved this plan two months ago, and the city council voted this week 7-0 to move forward on providing high-speed internet to all citizens as a public utility at a modest monthly cost. Big internet providers like Comcast and Centurylink spent millions trying to dissuade voters away from net neutrality, but they failed.

Just as Trump's FCC is failing to persuade the vast majority of internet users that dumping net neutrality is a good thing.

Lesson for North Carolina
One of the first noxious things the Republicans did in North Carolina after they took over the General Assembly in 2011 was pass a prohibition against NC municipalities' doing what Ft. Collins is doing. The law taking away the power of cities and towns to commission their own broadband networks passed both the House and Senate early in 2011 and went to Gov. Bev Perdue, who thought it was a very bad idea but who also let the atrocity become law without vetoing it (perhaps because she knew her veto would be overridden?).

Actually, the Colorado legislature passed a similar prohibition against towns and cities, but Ft. Collins and dozens of other Colorado towns are opting to override the prohibition. There's no such opt-out allowed for towns in North Carolina, but there definitely needs to be a united front in opposition to the law. In 2018 we can replace Rep. Jonathan Jordan and Sen. Deanna Ballard, or any other member of the General Assembly who thinks it's cool to grant internet monopolies to corporations that gouge their customers and provide sucky service.