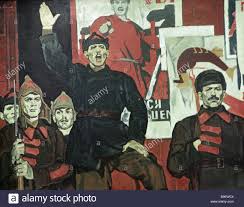 They are sent from the White House to keep an eye on the "loyalty" of Trump's top lieutenants. They demanded -- and got -- prime office space right next to the cabinet secretary's office. They appear at all high-level staff meetings to spy for Trump and report back to the White House. EPA Administrator Scott Pruitt has already gotten pissed off about the unsolicited advice, so he reportedly banned his "commissar" from many staff meetings.

According to Lisa Rein and Juliet Eilperin,


The arrangement is unusual. It wasn’t used by presidents Barack Obama, George W. Bush or Bill Clinton. And it’s also different from the traditional liaisons who shepherd the White House’s political appointees to the various agencies. Critics say the competing chains of command eventually will breed mistrust, chaos and inefficiency — especially as new department heads build their staffs.

But what's a little more mistrust, chaos, and inefficiency in this particular administration?

But never mind. Trump's spies will report to HDQs about the wreckage.

Posted by J.W. Williamson at 3/20/2017 07:45:00 AM
Email ThisBlogThis!Share to TwitterShare to FacebookShare to Pinterest
Labels: Donald Trump

The political commissar (also politruk from Russian: политрук from политический руководитель, "political officer") is the supervisory political officer responsible for the political education (ideology) and organization, and is solely committed to the leader.

Not exactly, the point, Wolfie. With - or without - your permission, those of us who have not drunk the KoolAid will continue to comment on the conduct of the country and the comportment of the current (part-time) resident of the White House.

I think you mean "short term" not "part time".

He might be removed from office, but Gorsuch will be confirmed by then, many embedded 5th Columnists will have been rooted out from government, his Secretaries will greatly diminish the power of leftist policies, illegal immigration will have been greatly curtailed, the economy will be growing, and the middle class will have more power and hope.

And every day the left is losing power and turning more and more average Americans against them.

It might be Kool aid, but if it is it tastes great.

"Wolf's Head 'by then, many embedded 5th Columnists will have been rooted out from government, his Secretaries will greatly diminish the power of leftist policies, illegal immigration will have been greatly curtailed, the economy will be growing, and the middle class will have more power and hope.' and 'It might be Kool aid, but if it is it tastes great.' "

I hear echos in your words of the German experience in the years from 1933-1939. The Nazi regime restored economic prosperity and ended mass unemployment using heavy spending on the military, while suppressing labor unions and strikes. The return of prosperity gave the Nazi Party enormous popularity. Great tasting Kool-Aid.

hmm I might wish to replace "echos" with admiration. Wolfsangel, anyone?

As usual, you have missed the mark with a wide berth.

Nazis were socialists, like the Democrat Party is now.

As for military spending, it was Obama who kept us at continual war during his 8 years in office. When he left we were still in Iraq and Afghanistan, and how is that shutting down of Gitmo going? Constant warfare has ruined much of our military equipment that will have to be replaced, and the human toll on our military and civilians overseas is horrific and unlamented by the callous Obama and his supporters.

Yes Mr Sears, you have missed the mark entirely.

Constant warfare.. I suppose Trump will stop it.

Oh, but Representative Mac Thornberry, Republican of Texas Republican and the chairman of the House Armed Services Committee, told reporters Wednesday that he expected the White House to remove “artificial troop caps” in Syria, Iraq and Afghanistan.

It would be fine by me if all of our troops were brought home, along with all of our military equipment and aid.

Let the muslims sort out their own problems. We have bled enough for people who are intent on killing each other.

"hmm I might wish to replace "echos" with admiration. Wolfsangel, anyone?" JS

Not me, but one of your poster boys was.

"Kennedy predicted in his diary that Hitler would “emerge from the hatred that surrounds him now as one of the most significant figures who ever lived.” From JFKs diary.

After all, his daddy was an anti Semite and admirer of Hitler himself.