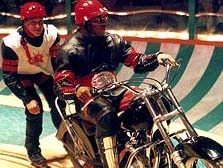 Trump went to a friendly corner last night (Tucker Carlson's show on Fox News) to make shit up that his supporters will likely believe.

Carlson asked the obvious question: Why did Trump tweet that President Obama had him wiretapped in Trump Tower? Trump hilariously answered that he had been reading the New York Times -- make that "the failing New York Times" and its "fake news" -- and suddenly, it dawned on him: “Wait a minute, there's a lot of wiretapping being talked about.”

Trump also claimed that "information" would soon be revealed that could prove him right, but he would not explain what that "information" might be. He said he would be “submitting certain things” to a congressional committee investigating the matter and that he was considering speaking about the topic next week.

“I think you're going to find some very interesting items coming to the forefront over the next two weeks,” Trump said, like a green grocer about to introduce a new line of Venezuelan peaches.

If you were a jazz musician, you would call what Trump just did "vamping" -- looping a repeated phrase while trying to think where to go next. Trump always does that -- promises additional "information" -- really earth shattering stuff that will knock everyone back on their heels -- in just a few more days. He did that same thing about those three million illegal voters he claims denied him the popular vote last November. No big revelation ever materialized, nor will it ever.

He's constantly caught in a lie, and he vamps.

Carlson then suggested that Trump “devalues his own currency” by tweeting things that are not true. Trump's response was as limp as overcooked pasta: “Let's see whether or not I proved it .... I mean, let's see whether or not I prove it. I just don't choose to do it right now .… I think we have some very good stuff, and we're in the process of putting it together, and I think it's going to be very demonstrative.”

"I just don't choose to do it right now." BWAhahahaha!

Then he took what he obviously considered a foolproof escape hatch out of the trap Carlson had maneuvered him into: “Don't forget, when I say 'wiretapping,' those words were in quotes. That really covers, because wiretapping is pretty old-fashioned stuff. But that really covers surveillance and many other things. And nobody ever talks about the fact that it was in quotes, but that's a very important thing.”

What? Oh, we get it. If Trump tweets something in quotes, it's not real. Like the failing New York Times.

I don't think we're going to survive this perjurer, America!

Posted by J.W. Williamson at 3/16/2017 10:39:00 AM
Email ThisBlogThis!Share to TwitterShare to FacebookShare to Pinterest
Labels: Donald Trump